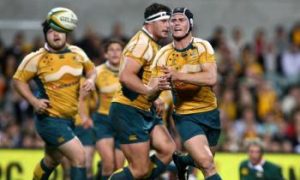 Many had traveled to this small baroque town from Stuttgart, the capital of the German state Baden Wurttemberg, expecting to see a show that brought a piece of the Chinese culture, spanning from ancient to modern times through classical Chinese song, dance and music.

By applauding enthusiastically, the audience showed its appreciation for a show that took them to another world.

Mr. Firnau, a retired administrative officer from the German government and his wife had looked forward to see and learn something from a far away culture they had never experienced.

"It was marvelous," said Mr. Firnau.

His wife joined the conversation, "It was something special. It was unusual. This is the reason why I'm so impressed with this show."

There was so much to take in during that show, beautiful costumes, a dancing style that was new to them, beautiful music and a backdrop that showed landscapes of China, complementing the performance.

"It was perfect precision and that is why this show is so impressive," said Mr. Firnau.

Remembering the show after letting it go through his mind, he expressed a deep appreciation of the choreography and the coordination among the dancers.

"During many scenes there were at least sixteen to seventeen dancers that were fantastic in the way they moved. That is a great team. Everything I have seen was outstanding."

His wife is a self-employed judicial officer who resigned from government service.

Being able to see this show is important to her, as she hasn't much knowledge of China.

"We know little about China and what we hear from the press is not favorable and always political," she said, sharing her thoughts.

But, then she said, "It was wonderful what this show gave us. On one hand redemption and on the other, a hope of salvation, which can only be understood by humans at the moment.

"Having introduced these ancient traditions and connected them to today's reality makes it especially wonderful."

Reporting by Rosemarie Fruhauf and Heide B. Malhotra.

Shen Yun Performing Arts will perform next in Stockholm, Sweden, followed by Lausanne, Switzerland and then Vienna, Austria. For more information, visit ShenYunPerformingArts.org