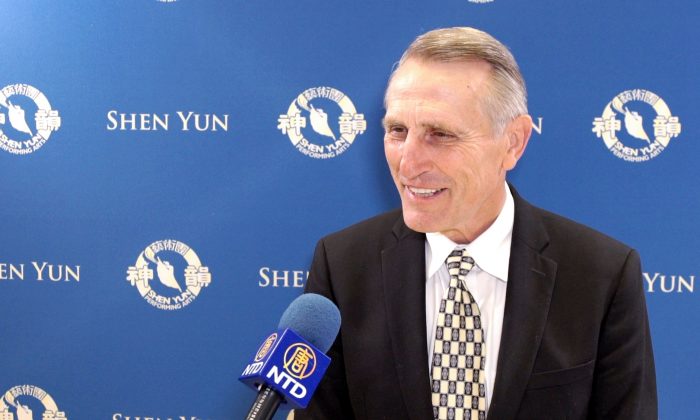 SALT LAKE CITY—When Dale Ure saw Shen Yun Performing Arts for the first time, with his daughters, he was moved deeply in learning how much he had in common with the Chinese people.

“I would hope that a good portion of America could see the close relationship that exists between the Chinese people and our people not only in the culture, but the beauty and joy, especially the values of virtue,” Ure said at the George S. and Dolores Doré Eccles Theater on March 14.

“It almost made me cry, it was just so touching to realize so many things we have in common, the goodness of our fellow man, the beauty, so artistically beautiful!” Ure said.

“The discipline of their bodies and their spirit, to bring their emotions and feelings and express it in a physical way that you could interpret it through the way they moved and their synchronization with the music, the way it was done was beautifully impressive,” he said.

New York-based Shen Yun was formed with the mission of reviving 5,000 years of China’s divinely inspired civilization, and bring it to the world’s stage. And the foundation of every Shen Yun performance is classical Chinese dance, the thousands of years old system of dance which Ure found so expressive.

Through dance, Shen Yun shows the breadth of China with its 50-plus ethnic minority groups, as with the Yi ethnic dance, or folk dances like the Mongolian cowboys near the snowy steppes.

The artists also tell stories from Chinese myth and history, showing this traditional culture and the values of a society centered around the idea of harmony between heaven, earth, and humankind, all the way up to the present day.

Through the various vignettes, Ure found a common theme, and a plot that resolved itself between the creation myth of China and its divinely imparted culture, to how that culture manifested in the present day.

“I thought the beginning and the ending [was] the creation of everything and the purpose of it,” he said. “And in the conclusion of it, the denouement of the whole plot is there is a reward, and there is a judgment to see how well we portrayed the true virtues within us, how well we were able to unite with our fellow man and to serve them, to make them better as we make ourselves better. I was impressed with that.”

The finale of Shen Yun was “so current and so relevant,” Ure said. He felt there was a strong takeaway about one’s own moral conviction despite obstacles we might face.

“It doesn’t demean us or lessen us just because people will abuse us or put us down, and [Shen Yun] portrayed how we can forgive and bring them in anyway,” Ure said. “Love them anyway. It’s the only way; only when your virtue exceeds the current problems will we lift others toward that virtue. So that was beautiful, the finale was wonderful.”

Shen Yun was so meaningful and moving to Ure because he felt it conveyed the real value of virtue, something which is hard to find articulated clearly, much less so beautifully.

“There’s such shortage of esteem for virtue for the value that it is, that holds all people together,” Ure said. “No matter your background, if you seek virtue and the goodness within, then you can mold together.”

“It’s when we start castigating everybody out, forgetting our own importance in our own virtue, and the own responsibility we each have to give virtue to other people because we have to have responsibility and that’s been neglected kind of severely in our modern times,” Ure said.

“You really need to get down and see this. It will change your vision of life—your own life, your family life, of your country, and the world as a whole. It’s a wonderful experience,” he said.