Shen Yun Shows That Traditional ‘Values Must Be Passed on to the Future,’ Says Japanese Insurance Business Owner 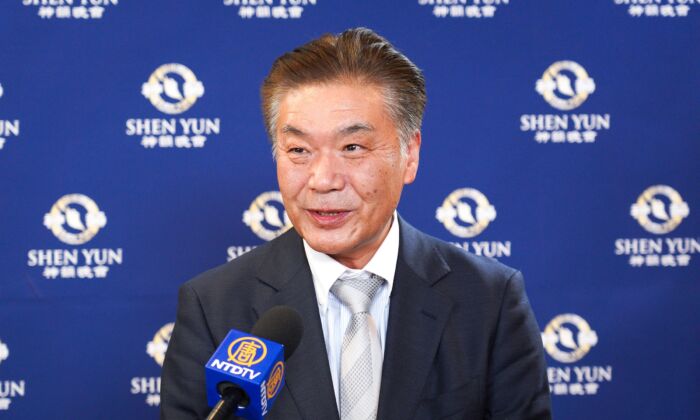 UTSUNOMIYA, Japan—A Japanese insurance business owner said the values that Shen Yun delivered should be inherited by all generations and passed on to the future.

“All of us should rethink our thoughts and behaviors, and rejudge what’s the right thing to do,” said Mr. Sugiyama Masahiro, the owner of Aflac Insurance Company, after attending Shen Yun Performing Arts at the Tochigi Prefecture Cultural Center in Utsunomiya on Jan. 21.

I saw in Shen Yun that we should treat others kindly. These values must be passed on to the future.
— Sugiyama Masahiro

“I saw in Shen Yun that we should treat others kindly. These values must be passed on to the future,” he said.

Mr. Sugiyama said that people today change themselves to meet the declining moral codes in society. The things that people thought were correct have deviated from traditional values. He appreciated Shen Yun’s guarding of tradition and compassion.

“If we lose our tradition, it’s not only the decline of humanities and culture, but also a very miserable thing,” he said. “No matter if it’s traditional Chinese culture or traditional Japanese culture, these are what our ancestors saved for us … we should save the wisdom of our ancestors, follow their guidance, and then we’ll have a big impact on the future.”

Chinese culture was built on values and virtues from the spiritual teachings of Buddhism, Taoism, and Confucianism, virtues like loyalty, propriety, wisdom, justice, and benevolence—values that are universal and shared the world over.

New York-based Shen Yun is the world’s top classical Chinese dance company. It has a mission to show the beauty and goodness of the 5,000 years of China’s civilization.

“This is my first-time attending Shen Yun. It’s so wonderful, which is out of my expectations. I was very touched,” Mr. Sugiyama said. “All male dancers and female dancers danced so smoothly and stable. They balanced and coordinated perfectly … The vocal soloists’ sounds are amazingly loud. The lyrics are shockingly meaningful.”

‘Will Make the World a Better Place’

Mr. Kawabata Makoto, an owner of a vehicle repair plant, was amazed by Shen Yun dancers.

“From the fingertips to their toes, every part of their movements is fantastic,” he said. “The performance is magnificent. I was very moved.”

Mr. Kawabata said he was surprised that the principal dancers and regular dancers all focused on cooperation rather than stardom.

“Every artist contributed positively to the performance. Every one of them has excellent skills and techniques,” he said. “I felt that no dancer took care of whether he or she was the principal, they worked very hard to form one body, and coordinated with the music perfectly.”

Mr. Kawabata said he was amazed by Shen Yun’s dynamic backdrop which extends the stage to a broader and deeper space, enhancing the dance pieces.

“Shen Yun Performing Arts can be accepted by everybody in the world. Audiences from different cultural backgrounds can enjoy Shen Yun,” he said.

Mr. Kawabata likes the culture that Shen Yun presents, and said: “Shen Yun touring around the world will make the world a better place.”

Every year, Shen Yun puts on an all-new production, including new choreography, music, costumes, and backdrop sets. The Shen Yun 2023 season will be its biggest yet, with its eight equally sized touring companies set to visit more than 180 cities across five continents.

Mr. Hattori Tokuaki is the president of a large hospital in Gunma Prefecture. He said Shen Yun is “very beautiful and very graceful.” He saw the true China in Shen Yun.

“The female dancers are very soft and elegant. Their dances present the unique Chinese traditional feminine charm. The male dancers are masculine, valiant, and full of power and energy,” he said.

“It’s really very beautiful!” said Mr. Anno Toshiyuki, a board member of an electronic company. He attended Shen Yun with his wife Mrs. Anno Hiromi, a businesswoman who operates a real estate company.

“The dancers can travel between the stage and the backdrop. It’s fabulous! The timing was controlled accurately, which really made me feel that the dancers were flying,” he said.

“What’s a deep sound it plays! My heart was calming down when I listened to erhu. I was relaxed,” she said. “The performance is like the therapy for the soul. I was cured. I’m very happy now.”

The Annos said they would like to attend Shen Yun next year. “I’m looking forward to attending,” said the wife.