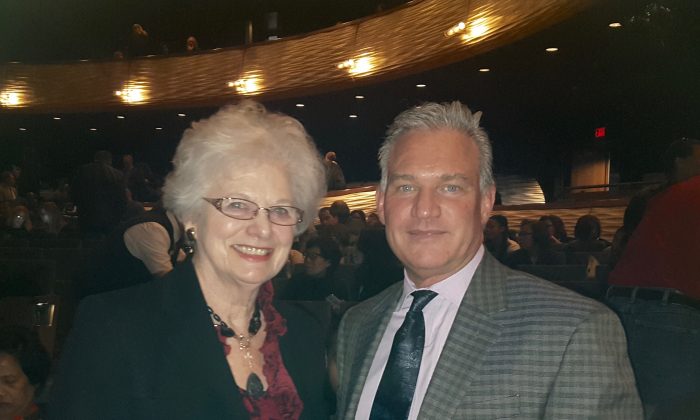 DALLAS—As the owner of a video production company, Ross Mason watched every aspect of Shen Yun Performing Arts’ vast production down to the details. He noticed the fabric of the boots, the percussive use of props, the practicality of one of the folk dances, and the hearts and souls of the artists.

“It’s a powerful expression of the soul,” Mr. Mason said at the Winspear Opera House, during intermission of the matinee performance which he attended with his mother Joan Mason on Jan. 2.

Mr. Mason, who had studied religions, explained how a number of religions were important culturally in China, for a long time, until communism took power. New York-based Shen Yun presents this traditional China—one imbued with spirituality—on stage through music and dance, and that makes all the difference, according to Mr. Mason.

“I think it’s very important. I don’t think that the expression of the heart and culture ultimately is true without spirituality,” Mr. Mason said. “Music and art and expression is based on the soul … it is not intended to be, or it’s not as rich or true, without the spiritual.”

In a word, the performance was “majestic,” he said.

The integration of the video to the stage, that’s genius.
— Ross Mason

Mr. Mason was struck by one dance that depicted a group of scholars in the year 353. Through classical Chinese dance, the dancers showed the scholars writing calligraphy, punctuated with loud snaps of fans. He described another instance where, with motion graphics in the backdrop, characters were flying through the air in one moment and “wow!” on stage the next.

“The integration of the video to the stage, that’s genius,” Mr. Mason said.

Like Mr. Mason, the way China had changed with the loss of its spirituality stuck with her. She explained how one could see what an imposition the communism of China today is, and how beliefs have been suppressed. But ultimately, Shen Yun brought hope for her.

“They’re inspirational because of the message they’re giving,” Mrs. Mason said. “They expressed hope. The hope of the eventual return to the China that once was.”