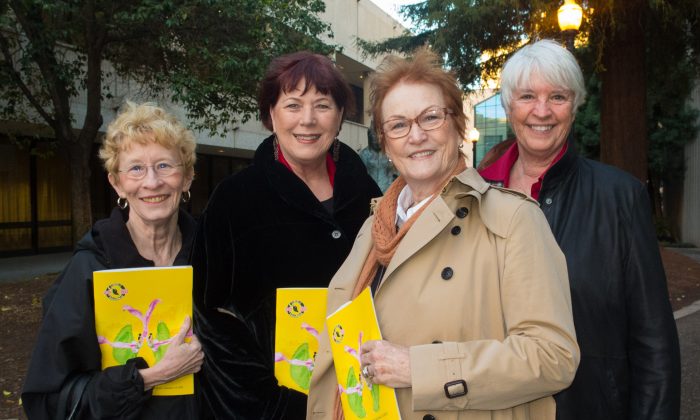 “[It’s] very emotionally touching, because of watching these beautiful people share their culture, share their history, and knowing that is happening in China today. It just really touches my heart,” Ms. Souza said. “Made me very emotional. It was just elegant, it was just beautiful. So grateful that we got to see it.”

Ms. Souza saw the classical Chinese music and dance company on Jan. 13 at the Sacramento Community Center Theatre. New York-based Shen Yun aims to present the authentic, traditional Chinese culture, one that is said to be imparted by the heavens.

Ms. Souza said this was clear from the very beginning of the performance.

“It was very clear to me that there is such close, close, and deep connection in China, as in other countries, with the divine,” she said, “with the divinity, … with the higher power.”

The way that was depicted in Shen Yun, with classical Chinese dance and an animated backdrop, really signified that connection and was beautifully done, she said.

Ms. Souza is a spiritual person herself, she said, who meditates and has a strong connection to the heavenly scenes Shen Yun depicted.

She saw and felt a foundation of spirituality in the performance. “Do I think the show is divine? Absolutely,” she said.

She spoke of the scenes and stories of ancient China, and how the dancers were ethereal. There were also scenes of contemporary China, where such traditional beliefs have been suppressed by the communist regime, and a story that touches on the the Cultural Revolution that was set to destroy traditional culture. Ms. Souza said those stories were heartrending.

“Just seeing those beautiful young people and knowing what is happening in China today. It really touches my heart.

“Because there are millions of people like them in China, with hearts like theirs, that have the kind of compassion and beauty to share. And that touches me deeply.”