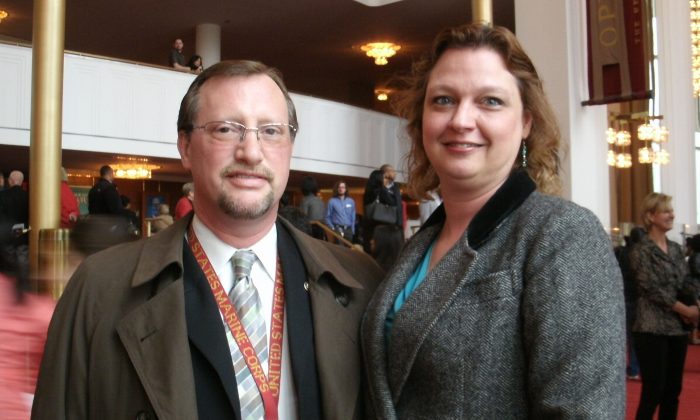 Dale Williams, commander in the U.S. Navy, and his wife Brenda Williams share their experiences of watching Shen Yun at the Kennedy Center Opera House in Washington, D.C., on April 25, 2015. (The Epoch Times)
City

WASHINGTON, D.C.— After seeing Shen Yun Performing Arts, a classical Chinese dance and music company at the Kennedy Performing Arts Center on April 25, Heather Howard, a professional dancer, said she could tell the dance was a “very old form.”

“It is very honorable,” she said. “And I see they have a lot of respect and they want to keep that culture as well as share it with everybody here.”

One of Shen Yun’s missions is to revive traditional Chinese art, which Chinese believed was given to them by the divine.

The word “shen” in Shen Yun means divine, and according to their website, “[Classical Chinese dance’s] beauty should be riches shared by all of humanity, and its purity should not be contaminated.”

One of the ways Shen Yun attempts to share this traditional culture is through retelling folk tales that have been passed down through the ages, like the classic “Journey to the West” tale about the monk who brought Buddhism to China.

“As a person that is not familiar that much with dance, I can actually see with the costumes and the graphics in the background. I can actually see what the story is being told,” said Terry Byrne, a director at the new Warren County Active Living Center in Virginia who attended the show on April 25.

“I thought it was very, not only entertaining, but very informative,” said Joseph Whitworth, a project manager for the U.S. Dept. of Defense.

“To do even a show like this, or to see the Chinese culture going back, how disciplined the people are,” said Sean Rashid, CEO at Click4Painters.com and Maid to Please. “They are hanging on to the belief for which you need discipline, in order to survive for hundreds and hundreds of years.”

The purpose of Shen Yun Performing Arts is to revive what it says was lost under communism and Mao’s Cultural Revolution, which attacked beliefs of all stripes and traditional culture as “backwards” and “unscientific.”

Dale Williams, a commander in the U.S. Navy, said losing that culture is a tragedy on a personal and societal level.

“If you lose a history, you lose the feeling of stability, in your own homeland or in your life,” he said. “I think the stability that it brings, I mean both knowledge-wise and to the people, is a wonderful thing.”