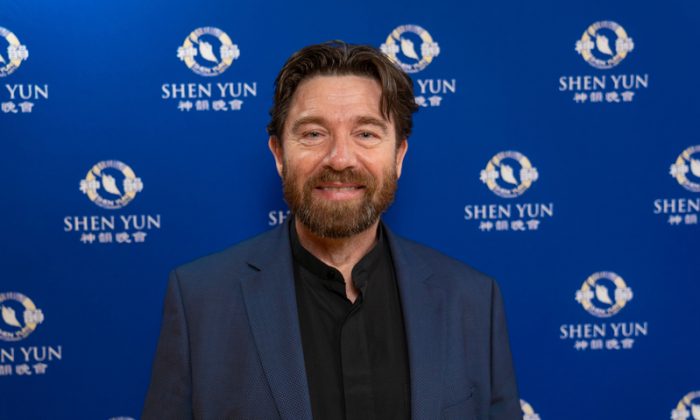 NEW YORK—Singer Mark Paul couldn’t stop smiling when he was watching Shen Yun Performing Arts. He was amazed by how, through classical Chinese dance, the performers were able to take the viewer on a journey into different worlds, mysterious dimensions, and ancient palaces, describing it as “the highest level of storytelling that you can get.”

Paul experienced the performance at The David H. Koch Theater at Lincoln Center on Jan. 18. Shen Yun is the premier classical Chinese dance and music company, with a mission to revive China’s semi-divine culture. He said the performance took his breath away.

“I had never seen such a performance all the way from the beginning to the end at such a high level,” said Paul, who is a member of a barbershop quartet. He performs a cappella songs.

He was particularly impressed by the way the stories were told through dance.

“It allowed me to go just totally release every dimension of who I am and go with where the performance was taking me,” he said.

“I felt the story … [I] can feel the storytelling coming through the actual precise elegance of the dance.”

Classical Chinese dance is rich with expressive power. This is portrayed through a dancer’s bearing—which can be described as a particular inner spirit—and their form. Beautiful dance movements bring out the inner meaning of intrinsic thoughts and feelings, reflecting the peculiarities of human nature, the standard for human conduct, moral concepts, mental state, one’s value system, according to the Shen Yun website. This aspect of the dance impressed Paul the most.

“I don’t think I’ve ever been to a performance where the storytelling took me so effortlessly,” he said.

Meanwhile, he said the performance delivered an important message.

“We’re heavenly bodies that are here on earth and we’re here to deliver a message—and the message was received,” he said. “It really was.”

Paul added Shen Yun could only have reached such a high caliber because of its teachers and artistic director.

“I’m so taken away by the teachers, such hard work that was put into allowing all of those performers to be at that level,” he said.

“I just think about the practice of putting on such an elegant performance every single night, [it] takes 100 percent commitment.”

With reporting by NTD Television and Janita Kan.