Shen Yun Shines in The Hague 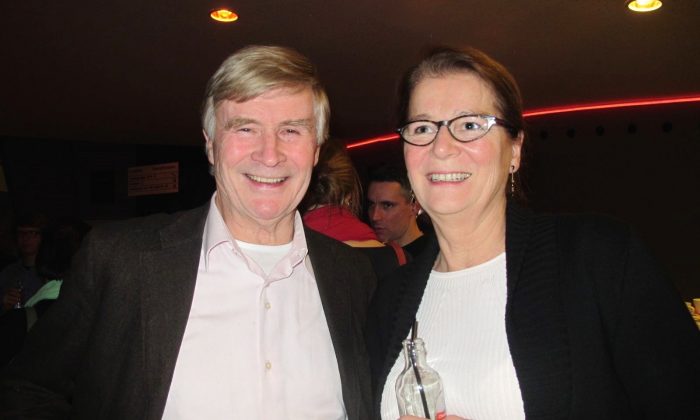 Annemarie and Olaf Penn at the Shen Yun performance held at the Lucent Danstheater in The Hague on March 3, 2015. (Mary Mann/Epoch Times)

THE HAGUE, Netherlands—Following a three-day stop in Geneva, the seat of many international organizations, Shen Yun Performing Arts brought its exhilarating performance of classical Chinese dance and music to The Hague, the seat of the World Court, and the Dutch government.

Annemarie Penn, the prosecutor-general of the Netherlands, along with her husband Olaf Penn, a heart surgeon and president of a municipal party, were enthralled with to Shen Yun.

“Very good, we enjoyed it very much. The movements, the colors, the music, the nice people—beautiful,” said Ms. Penn.

Ms. Pen said she was touched by the piece Power of Compassion, which shows the persecution of practitioners of Falun Gong, also known as Falun Dafa, in China, while the practitioners show compassion to their attackers.

Based in New York, Shen Yun was formed with a mission to revive China’s divinely inspired culture. The company was formed in 2006, and has grown to include four performing groups, each with a full orchestra, traveling the globe each year with presentations of classical Chinese dance and music.

“This is so traditional and profound, deep with cosmic knowledge,” Ms. Handstede said, who is a painter.

“Very much from the heart,” she said.

As the Shen Yun website explains, the company’s performances are rich with traditional Chinese culture; in the company’s words, when a Shen Yun performance is under way, “mortals and divine beings merge on stage as one.”

Reflecting on the performance and different themes in the pieces, Ms. Handstede said there is only one creator: “We are not separated. There is no separation. This is just an illusion and we live in the illusion and with [Shen Yun] I am seeing it, hearing it; it touches my heart.”

“The heart gets open to this knowledge and this beauty of dancing and performing; the divine shines.”

Shen Yun, added Ms. Handstede, is rich with “cosmic knowledge,” and a knowledge from a very, very high level.

“It is divine. I am very, very thrilled and very pleased to have seen this,” she said.

The music, performed by the Shen Yun Orchestra which combines traditional Chinese instruments with Western ones, also had a lasting impression on Ms. Handstede.

“We have forgotten that music from a higher order that resonates with your cells, is communicating with your cells … My cells were enjoying and loving this. I felt it. You get these goosebumps inside, and that is good, that is divine.”

‘Hope for the Future’

“What I really found interesting were the teachings, such as having compassion for each other, to be living peacefully together, and not opposing each other, and also being tolerant,” she said.

Ms. Vandenberg said she enjoyed various elements in the performance, including the dancing, the music, and the mini-dramas presented in classical Chinese dance, each based on Chinese legends or modern tales, as well as some showing ethnic and folk dances from different parts of China.

“I saw hope for the future in the show. There is always hope. … I loved it; I enjoyed it very much,” she said.

Reginald Sawilla, who researches cyber security, along with his wife Darcy, were amazed at the talent of Shen Yun dancers.

“I thought they were so graceful, the way they moved,” added Ms. Sawilla.

“I specifically like how they show the dancers from the different cultures in different regions, I thought that was really fascinating, … how different each of them were,” she said.

“I felt privileged to be able to see it,” Mr. Sawilla said.

With reporting by Mary Mann and Florian Godovits