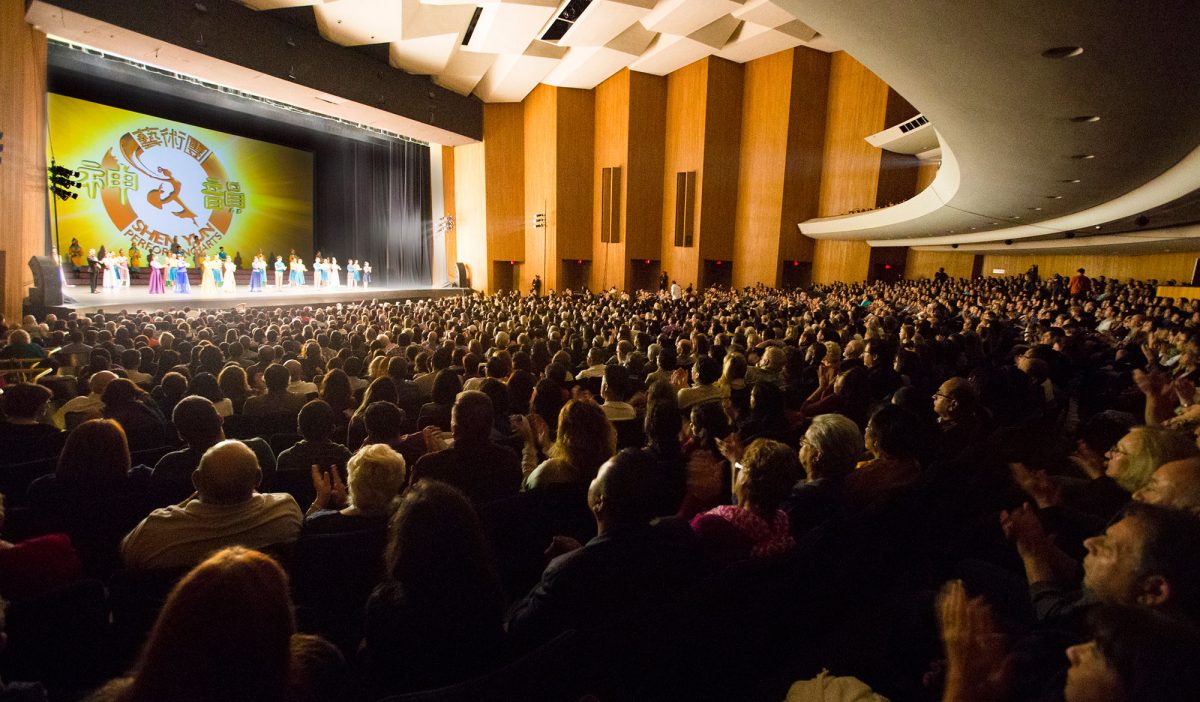 All one needs to do is observe the excitement of young and old audience members as they meander in the lobby before a performance, how they wait in a line five or ten people deep to take photos with their families or friends on the red carpet in front of the Shen Yun backdrop, their smiles, their comments as they leave a performance and realize that Shen Yun has become a family destination.

Shen Yun is a non-profit, New York-based, classical Chinese music and dance company that seeks to revive the beauty and values of traditional Chinese culture, which have been all but lost after decades of rule by the Chinese Communist Party.

Each performance includes approximately 20 vignettes, each no longer than 10 minutes, that whisk audiences on a journey through 5,000 years of China’s divinely inspired civilization.

Myths, legends, and modern stories of courage come to life as ancient principles of benevolence, endurance, wisdom, and respect for the divine are presented in rich detail.

In addition to the world’s foremost classically trained dancers, Shen Yun includes a full, live orchestra that blends traditional Eastern and classical Western instruments and digital, animated backdrops that “infinitely expand and transform the stage,” according to the company website.

Audiences around the world have expressed their strong affinity for Shen Yun and appreciation for the feelings elicited while watching. Here’s what a handful of audience members at the Feb. 8 performances had to say.

‘It was as if Heaven Kissed Earth’

Victoria Constantin, who works in the mortgage industry, saw Shen Yun with her husband, Michael, director of a non-profit charity.

Mrs. Constantin said, “It was as if Heaven kissed earth; I will be back next year. And I will be looking forward to it.

“It was a touch of heaven. It was divine. Truly divine,” she said. “I’m so glad I got a chance to really experience a little bit of the Asian culture. It’s such a beautiful way, and so artistic.”

She enjoyed the erhu solo.

“The two-stringed instrument was beautiful. That was just, that was purely just genius. It was divine, divine! I keep saying divine because I believe it was God-inspired. I believe that it was truly a touch of heaven.”

“The dancers, I could really feel their energy, their joy—it was radiating,” he continued. “The costumes were beautiful, and I loved the way they incorporated the costumes into the dance—so powerful, so moving, just so grateful to have seen it.”

Mr. Vorst said he became emotional while watching a vignette called The Power of Compassion, which depicts a story based on events happening in China today. In it, a violent police officer in the midst of persecuting Falun Dafa practitioners changes his ways after they help him recover from an injury.

“For me, the most touching, sentimental [piece]—I cried a lot—was during the scenes of forgiveness and compassion, the teaching of forbearance, compassion, truth, [and] acceptance of people.”

She enjoyed the traditional values displayed during the performance and commented that Shen Yun “wakes people up to think about what is really important in life.”

“We traveled a few hours and spent a night in hotel to be sure we wouldn’t miss the show, so we definitely want to come back with a larger group,” she said.

She continued, “I had no idea there would be excellent story telling, that the [company] is as large as it was, and there was a full orchestra. It was absolutely amazing.”

“There are moments where you’re just breathless from experiencing what’s going on,” she added.

Lisa Wagner, a psychotherapist, attended Shen Yun with her husband, Craig, an attorney for the film and television industry.

“The whole experience was very heart-opening and touched my heart,” Mrs. Wagner said. “I loved the show. It was fantastic. The dancers were exquisite, graceful, and looked like divine beings up there—divine entities moving—and it was fantastic.”

Shen Yun’s website explains that respect for the divine is at the heart of Chinese culture.

Mrs. Wagner said she enjoyed the piety displayed in the vignettes and that it was a great representation of the Chinese culture.

“It’s about purity and self-discipline and grace and elegance and caring for one another,” she said.

After the performance, Mr. Wagner said, “It’s inspiring to see what’s possible in the arts.”

‘Excited to Get Here’

Carol McNicholl, who formerly worked in the environmental services bureau of Long Beach, was excited to see Shen Yun.

“I just got goosebumps,” she said. “I was excited to get here.”

Commenting on the singers, Ms. McNicholl said, “Oh, my. The voices they had were amazing.”

“I read some of the reviews [about Shen Yun], and they’re all true. It’s just great to be here,” she continued. “It’s amazing, and I hope to God they bring it home [to China].”

‘You Have to See It’

“While I was watching, I wanted to cry,” he said, referring to the piece entitled The Power of Compassion. “That’s the way we all should be—not nasty; not hateful; but kind and helpful.”

Ileana Cataldo, a property manager, attended Shen Yun with her husband, John, and her Chinese client.

Mrs. Cataldo was highly impressed. “Oh my gosh, it’s amazing. Beautiful,” she said. “The women are so graceful and the men are so strong. It’s just so beautiful.”

She added, “It’s just incredible. I’ve never seen a show like it. Never.”

‘Good For the Mind and Soul’

John Wiggins, an entrepreneur, also watched Shen Yun Feb. 8 at Terrace Theater, and he enjoyed it.