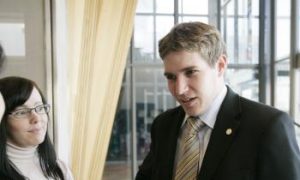 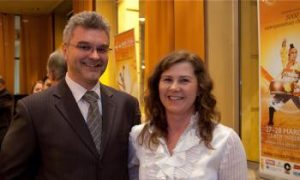 Banker: 'The scale of the colors was stunning'
0 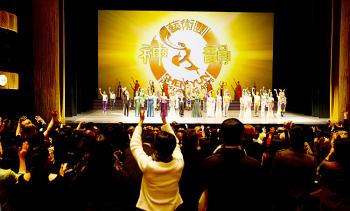 Shen Yun “represents all of our history” Says Dance Enthusiast

By Epoch Times Staff
Print
NEW YORK—A dance enthusiast was amazed by a scene from a Chinese story of the world's beginnings that he witnessed on stage at the David H. Koch Theater, Lincoln Center, on Jan. 13. He found the scene from Shen Yun Performing Arts New York Company's performance to be relevant to people all over the world.

Frank Figarella, an American business president, commented extensively on the dance piece that opens the show, titled When Kings Followed The Creator To The Earth.

"It was an epic scene and …  a very heavenly scene, and when … 'God' was coming down from the Heavens, I found that very spiritual," said Mr. Figarella.

"It was very colorful, and it was a very wonderful opening scene, [one] that you would be able to relate to, because  it represents all of our history, all over the world whether it be Europe, China, Japan," he continued.

Mr. Figarella said that When Kings Followed The Creator To The Earth depicted a deep human desire—that all people want to become closer to God.

"It was … the whole world coming close and becoming closer," he said.

The dance piece tells of the Creator inviting other divine beings to follow him down to the earth, where they become kings of all nations, in order to establish cultures across the human world.

"It’s a scene that [shows what] people are looking for in their lives." The piece also caused Mr. Figarella to contemplate the meaning of life, and to deeply think about what he saw as premature deaths.

"I've lost a lot of people in my life that have been very close to me. And you ask yourself, why do these good people pass on?" he questioned.

Mr. Figarella said that he had seen many different performances at Lincoln Center. On Jan. 13, he was seeing Shen Yun for the second time in a week; he had also attended the show on opening night the previous Thursday. He developed an admiration for one female dancer in particular, Michelle Ren, who plays the main role in the dance piece titled Our Story.

Mr. Figarella continued: "When you see dance all the time, like I do, you know when someone is there and is capable of doing that. And she really has that talent. She's a very talented woman."

Mr. Figarella was right on target with his assessment of Ms. Ren. She is indeed the choreographer of Our Story. This piece tells of a teacher who guides her pupils not just in the art of writing, but life. One day she writes the Chinese characters for “truth,”  “benevolence” and “forbearance” on the blackboard. These three words, which were once essential values in classical China, are central to the spiritual discipline known as Falun Dafa, which is currently banned in the mainland. After the teacher writes these words, state police burst into her classroom and take her away. Her students, who remain by her side, are ultimately rewarded for their courage and conviction with a miraculous scene.

Michelle Ren has been dancing since she was six, and has extensive training in classical Chinese  dance. She currently serves as a choreographer and a principal dancer with Shen Yun Performing Arts.

Reporting by Yan Weisi and Andrey Volkov and Sophia Bronwen