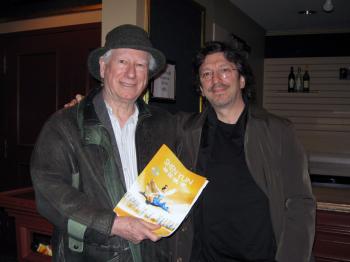 “It makes me wish of translating dance into writing,” he said of Shen Yun. “It would be a wonderful thing, I could get my writing off the page like they get off the floor.”

Translations of his books are available in China, Japan, Russia, and across Europe.

“I am very well-known everywhere except Toronto,” the author quipped.

But Mr. Engel has earned acclaim in Canada for his work.

In 2007, he received one of Canada’s highest civilian honours when he was made a member of the Order of Canada. He’s also received the Arthur Ellis Award for Crime Fiction. Besides writing, he has also worked as a producer for CBC.

After taking in Shen Yun at Canon Theatre on Saturday night, Mr. Engel said the show left him rejuvenated.

“It’s very uplifting. It renews my spirit,” he exclaimed.

Mr. Engel felt he had “bathed” in the Chinese culture watching Shen Yun, describing it as a “refresher course” in a culture he’s always enjoyed.

“It contrasts so nicely with the culture I know and also its differences are remarkable. It’s so congenial but they do underline and illuminate the human spirit.”

Shen Yun “seeks to revive the true, five-millennia-old artistic tradition of China that thrived before decades of suppression by the Chinese communist party,” according to the website of the classical Chinese dance and music company.

“The company seeks to breathe new life into traditional Chinese culture while providing audiences everywhere with an experience of sublime beauty.”

According to Mr. Engel, it seems the company has succeeded in that goal.

“I brought my program with me to show to friends,” he said. “I hope they will come to see it. I would tell my friends that it’s not to be missed. It’s a must see. It’s something that they should do before they do their income tax.”

Shen Yun’s performances include animated digital backdrops which interact with the dancers at times and present living landscapes at other times. Mr. Engel said he enjoyed this aspect of the performance.

“The beauty and the variety of the Chinese scenes are remarkable to look at in the splendid backdrops against which the dancers play,” he said.

He described the orchestra as “outstanding.”

“Sometimes with things like this it’s a playback. But this is a live orchestra and they responded to the action on stage very well.”

Mr. Engel was invited to the show by Rocco Galati, proud father of Miranda Zhou-Galati. Ms. Zhou-Galati is a principal dancer with Shen Yun’s International Company, which is putting on the four shows this Mother’s Day weekend in Toronto. The final show will be held on Sunday afternoon.