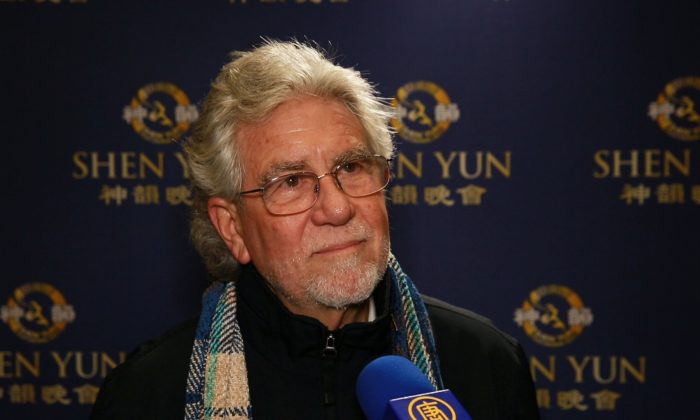 “I love the show,” said Mr. Zovar. “I think I could experience it everyday to tell you the truth, to remind me of how to be a better human being.”

New York-based Shen Yun was established in 2006 with the aim “to revive the true, divinely inspired culture of China and share it with the world,” according to the company website.

The non-profit classical music and dance organization has now become a global phenomenon, touching the hearts of millions.

Mr. Zovar said he came to see Shen Yun for the second time because, “besides the beauty of the dance and the performances are guidelines to live a better life, to live on principles that are in harmony with the universe and with helping other human beings, and with being at peace with myself.”

According to the Shen Yun website, “Sophisticated dance techniques, an orchestra joining instruments from both the East and West, beautiful costumes, and a stunning back drop—this is Shen Yun at first glance. But digging deeper, one discovers a sea of traditional Chinese culture … Principles such as benevolence and justice, propriety and wisdom, respect for the heavens, and divine retribution, all come to life, washing over the audience.”

Mr. Zovar said the principles he witnessed in the Shen Yun performance, such as truthfulness, compassion and tolerance, are needed in the world today.

“We need to think about these principles. We’re all human beings, we’re all in this world together, and we all need to help each other and be compassionate.”

He said the power of these virtues was evident in the stories behind the dances, as well as a message of good overcoming evil.

“I think that the spiritual principles that are portrayed … could be good for Chinese society.”

Mr. Zovar said he and his wife would come again and recommend the show to others, saying it would be helpful for humankind.

“After being around this long, 88 years, I’ve been all around the world. I’ve been to China,” said Dr. Derfler. “I thought it was one of the most original, unusual shows I’ve ever seen…I just feel that they capture the spirit of mankind and love.”

“They give you a feeling of actually belonging in the surroundings you’re watching,” he said. “I stood up and said, ‘Encore!’ I just couldn’t believe how beautiful it was.”

Dr. Derfler said all the performers and musicians were perfectly attuned to each other and blended beautifully. He said he enjoyed the soprano soloists and their pianist and felt they balanced out the performance, and he also thought the bilingual hosts were very humorous and helped with the feeling of the whole production.

“The way they twirl their costumes and sort of lived in them and how they faded into the screen,” he said. “It just was fantastic.”

Dr. Derfler said he would try to come back next year, and he would recommend the show to his friends.

“If you don’t go, you’re missing a large part of your life,” he said.

“I loved it,” she said. “It was a life-changing experience to be honest with you. I never expected that I was going to learn so much about a different culture just by attending a concert.”

“Since ancient times, China has been known as the ‘Celestial Empire,'” states Shen Yun’s website. “This refers not only to China’s strength and position as East Asia’s Middle Kingdom, it also captures a more profound meaning, describing a land where the divine and mortal once coexisted. It refers to the belief that the divine, through various dynasties, transmitted a rich and abundant culture to the Chinese people. Chinese culture is thus known as ‘divinely inspired,’ and is the only culture in the world to have a continuous recorded history of 5,000 years.”

Ms. Galstian said through the dance, music, and colors, she felt the artists’ dedication to traditional Chinese culture and what’s good and beautiful.

“I understand that there is another culture out there that has such amazing history and such wealth of knowledge in music, in dance, in struggles, in religion, in faith,” she said. “I never knew anything about Chinese culture before.”

A sense of goodness winning out over evil was very apparent to Ms. Galstian as a theme throughout the performance.

“I was pleasantly surprised to understand and to see that two strings can make you feel happiness, and then it was also sadness. So very full of different emotions.”

Yet Ms. Galstian said the overwhelming feeling she took away from Shen Yun was one of happiness.

“The happy two and a half hours or three hours, it just went so fast. It was very pleasant and enlightening. I just enjoyed every moment of it.”

With reporting by NTD Television, Marie-Paul Baixu, and Sarah Le