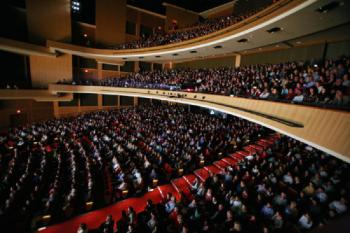 Shen Yun made a successful debut to the area last season in Durham. The show was enthusiastically received by a sold-out audience. For the 2010 season, Shen Yun returns 30 miles down the road on Interstate 40 in the capitol city of Raleigh. Raleigh, along with the cities of Durham and Chapel Hill, make up what is called the Triangle area in central North Carolina.

Known for its high-tech industry and research institutions, the Triangle is home to the famous science park, the Research Triangle Park. This Saturday, audiences in the modern Triangle area get to experience the magic and beauty of a glorious, ancient culture when Shen Yun brings to life 5,000 years of traditional Chinese culture on stage.

With all new songs, dances and musical arrangements, and an accompanying orchestra this season, Shen Yun will perform in Raleigh's venerable 78-year-old Memorial Auditorium.

General manager Jim Lavery is excited about hosting the show for the first time in Memorial Auditorium.

“We are excited, honored and amazed at the popularity of this production,” he said.

“The Progress Energy Center is very proud to host this highly anticipated international touring show that we have heard so much about. We look forward to a spectacular engagement at our Memorial Auditorium.”

Amy Cheng is president of the local non-profit group, the North Carolina Falun Dafa Association. The group is the official local sponsor of the Shen Yun shows coming to Raleigh.

Ms. Cheng believes that the Shen Yun performance will be an annual cultural tradition in the Triangle.

Last year (the 2009 season), Shen Yun sold out in Durham. This year they will perform two shows in Raleigh.

"Hopefully, in the future, there will be even more shows in the Triangle and other cities in North Carolina every year as Shen Yun becomes more popular and famous,” Ms. Cheng said. “It's great Triangle residents can experience and learn about genuine Chinese traditional culture. It (the show) is entertaining, educational and inspiring for the whole family.”

This year, Shen Yun has received greetings from North Carolina governor Beverly Perdue, along with the mayors of Raleigh and Durham, Charles Meek and William Bell, respectively. Congressman Mark Price and Bob Etheridge have also sent in their greetings, as well as several state senators and representatives.

Shen Yun Performing Arts is considered the world's premier Chinese dance and music company. The company is based in New York and is a non-profit organization. Independent of China's communist regime, Shen Yun's stated mission is “to revive the true, five-millennia-old artistic tradition of China.”