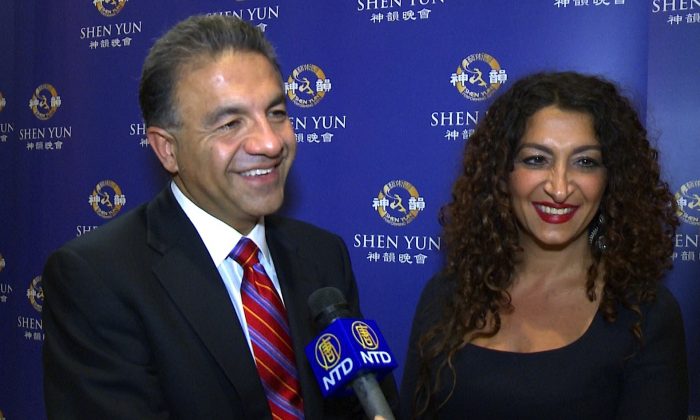 “I saw unity. I also saw a culture that is yearning for the spiritual soul of itself,” he said during intermission on the evening of Jan. 17. Mr. Tedjarati is an associate professor of obstetrics and gynecology at New York Medical College and head of the gynecologic oncology division at Westchester Medical Center.

Traditional Chinese culture is based on reverence for the divine. Yet today, under the rule of the atheist Chinese Communist Party, these ancient traditions have almost been destroyed.

New York-based Shen Yun was founded in 2006 by leading Chinese artists who wish to revive traditional Chinese culture through song, dance, and music.

Mr. Tedjarati said he now has a deeper understanding of ancient Chinese culture and its intrinsic tie to spirituality.

“Just the richness of this culture,” he said. “The spirituality in the culture that you don’t really think about currently.”

Some of Shen Yun’s performances consist of story-based dances that revolve around traditional Chinese folklore such as Sweeping Out the Tyrant; a classic Chinese tale of a supposedly insane monk who sweeps a sinister historical official out of a temple. It highlights the ancient Chinese value of a person’s ability to see beyond the surface.

“I really enjoyed that it brings Chinese history to us,” Mr. Tedjarati said. It takes away our view of current China and puts us back into ancient China.”

“It’s not necessarily the economic giant power that we think about in the last 30 years,” he said.

Mr. Tedjarati said he has been to China a number of times.

“[Shen Yun] gave me a different view,” he said. “When you look at China today it doesn’t really give you the good sense of it.”

“It sort of opened up a different window,” he said. “Most of the movements, there’s even spirituality in the movements. It’s almost like a prayer during the entire show.”

He attended the show with researcher Shadi Salehin, who said she was taken aback by the skill of Shen Yun’s choreography.

“It definitely makes me feel I’m dreaming,” Ms. Salehin said. “I hope they will be able to go back to China and present it.”

Shen Yun is unable to perform in China due to the Communist Party’s “systematic attempts to wipe out the heritage of 5,000 years of civilization,” the company website states. “The mere representation of this lost heritage and its virtues immediately, by way of contrast, unmasks the Party and its ideology of struggle.”

Having Shen Yun perform in China could “perhaps open the Chinese eyes to their vision of … [what] China actually looks like,” Ms. Salehin said.

“Because for them, I think they definitely see the spirituality. That’s my hope for them, that they would be able to go back to China and perform that.”