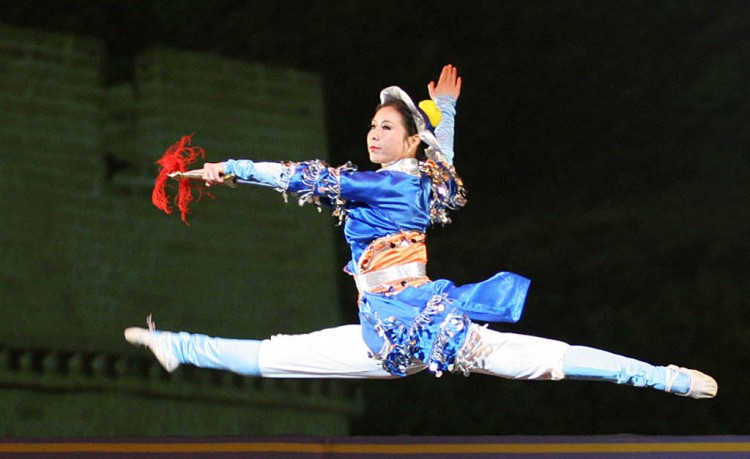 Mulan triumphant in the battlefield, as portrayed in a dance in the 2006 NTDTV New Year Gala performed in Chicago. (The Epoch Times)
Arts & Culture

All but lost in the East, the essence of an age-old culture rises in the West. This is Part 7 of a nine-part series that explores traditional Chinese culture to reveal a deeper understanding of the genius of New York-based classical Chinese dance company Shen Yun Performing Arts.

An Introduction to Shen Yun Props

Swishing, spinning, and clapping in the hands of Shen Yun’s dancers are various ingenious props, designed to visually and aurally enhance the stories they tell through choreography. Each year, Shen Yun Performing Arts brings a new program to stages all over the world, and each dance number is a snapshot of a moment in Chinese cultural history. Below are some of the ways props have been used to transform dancers into characters from China’s ancient past.

What Makes a Lady

In Imperial courts, female members of the elite were distinguished by their elegant dress. In the Qing Dynasty court, a Manchurian woman wore high-platform shoes and an elaborate headdress that lent her a noble bearing and an even, stylized gait. To highlight their beauty, ladies carried dainty silk handkerchiefs that swayed with each step and emphasized their elegant gestures.

Long, draping sleeves on ladies garments, typical of Tang Dynasty couture, also act as props in the same way. As ladies open and close their arms in dance, the brightly colored sleeves produce a tableau-like effect on stage and mimic the luxury of the court.Whereas in some pieces female dancers portray the high elegance of court life, in others they come back as sprightly folk performers. In a piece called Forsythia in Spring, dancers spin beaded orange handkerchiefs on their fingertips and toss them open into the air. Together, dancers and handkerchiefs produce the effect of flowers blossoming in the countryside.

Fans are another popular aid in classical Chinese dance. They can be silken, feathered, or furnished with long strips of flowing fabric. When dancers become water fairies, they carry ombré-dyed blue silk fans that shimmer like a waterfall when waved. In a dance titled Plum Blossoms, dancers carry pink fans that explode open at the end of the piece like plum flower buds in midwinter.

What Makes a Monk

Chinese legends often depict figures carrying gourds—divine doctors used them when treating patients; Tieguai Li, one of the Eight Immortals of Taoism, always had a golden gourd slung over his shoulder; and the eccentric monk Ji Gong never let his wine gourd leave his side. The drunk monk Lu Zhishen, who starred in a 2011 Shen Yun dance, had a gourd strapped to his hip. Chang’e, who featured in a 2007 Shen Yun number, drank a magic potion from a gourd and flew to the moon as a result.

The gourd is a type of climbing plant from the Cucurbitaceous family, which also includes squash and melon. Ancient people fashioned gourds into snuff powder bottles and flower vases. They were also used as containers for water, medicine, and liquor. Bottle gourds have the ability to preserve the taste of wine for a very long time.

A Taoist whisk is another common prop to denote a spiritual man. Many Shen Yun dance dramas depict an elderly Taoist sage, with white hair and a trailing beard, teaching his disciples while brandishing a long whisk made of hemp and animal hair bound to a wooden handle. Taoist priests and monks carry whisks during their spiritual wanderings. Zen Buddhist abbots also wield them when giving sermons. The whisk thus symbolizes the majesty and solemnity of spiritual teaching.

In Taoist culture, whisks are believed to have the power to sweep away one’s worldly desires and carnal thoughts, imparting a sense of transcending the mortal realm. Another interpretation portrays demons and evil spirits as the filth of the world, and Taoist whisks as magical instruments with the power to exorcise them.

What Makes a Warrior

Nothing announces the power and majesty of the Imperial army like the boom of a war drum. With such a majestic sound that could be heard from afar, war drums became critical for galvanizing an army’s morale. Different beats guided the soldiers into different formations, with one rhythm for “attack” and another for “retreat,” for instance.

Continued: No longer a tool of war …