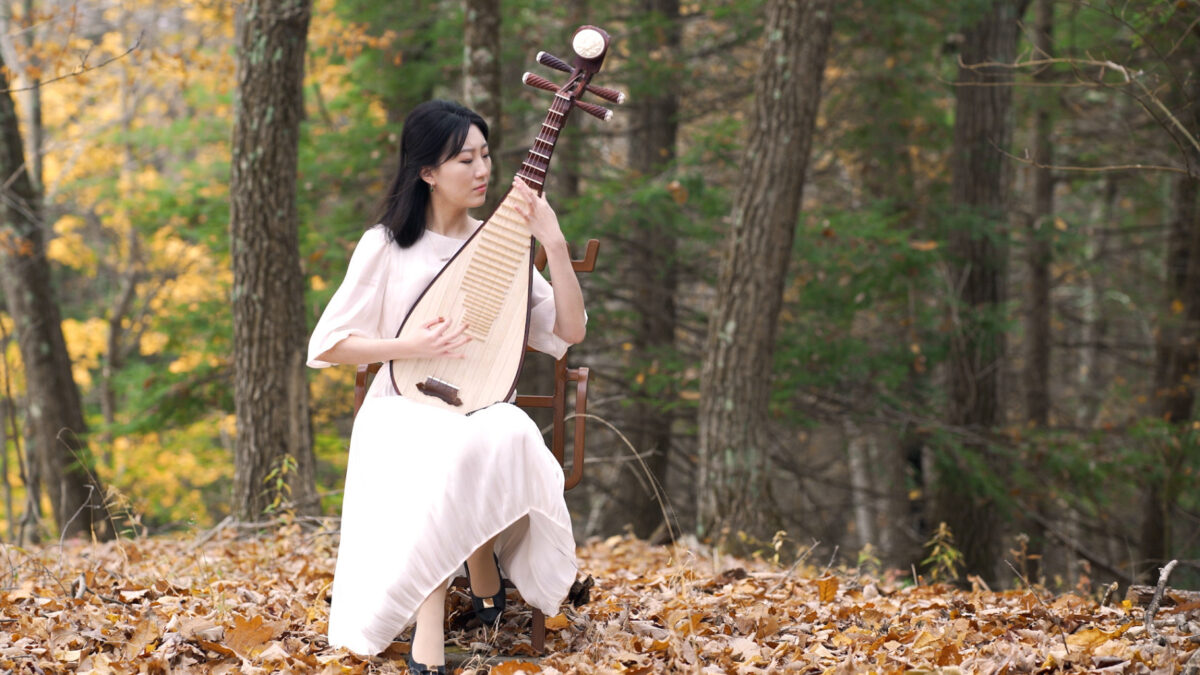 Onstage, an emotional story set in mainland China was playing out through dance. A young couple who practiced the spiritual discipline Falun Dafa had just welcomed their first baby. It should have been a happy story, but soon the couple were kidnapped and tortured by regime authorities, and their newborn became an orphan.

As Liang, a virtuoso on the pipa, or the Chinese lute, sat in the orchestra pit, she would get chills as soon as the dance began.

“Because I myself had similar experiences,” Liang said in a video posted on Shen Yun Performing Arts’ new website, Shen Yun Creations.

“I had to watch my mom get arrested.”

Persecuted for Their Faith

“I remember so clearly,” Liang said. It was the fall of 1999, and she and her mother and some women in the neighborhood went to a local park to practice meditation together.

They were practicing Falun Dafa, a spiritual meditation discipline that teaches the principles of truthfulness, compassion, and tolerance, as well as five slow-moving exercises. In the early 1990s, Falun Dafa spread rapidly by word of mouth, attracting an estimated 70 million to 100 million practitioners in mainland China in less than a decade.

“At the time, they were doing the second exercise,” Liang said. Then she saw something outside the park. “I saw a bunch of cars and vans coming closer, and the local security guards swarmed in on us. I was terrified. I remember tugging at my mom’s elbow. I said, ‘Mom, they’re coming to arrest you!’

“It all happened right in front of my eyes. Those people got closer and closer, and then they dragged them all away.”

In 1999, Chinese Communist Party leader Jiang Zemin ordered the eradication of Falun Dafa, also known as Falun Gong. Almost overnight, practitioners began to be rounded up and detained, sent to forced labor camps and reeducation centers, and tortured, many to death.

Because Liang was just a young child, the police made no move to arrest her.

Eventually, Liang’s mother was released. But over the next two years, she was imprisoned four times for her faith.

As a person of faith living under the Party’s regime, Liang’s mother wanted her daughter to have a better future. Over the years, she encouraged Liang, a talented pipa virtuoso, to apply to ensembles.

As fate would have it, one major performing arts company founded in America specifically had need for highly skilled musicians of traditional Chinese instruments like the pipa.

“When I was studying in Beijing, my mom told me: ‘I have good news! Shen Yun has accepted your application. You can go now,’” Liang said.

When her parents came to send her off at the airport, Liang knew she wouldn’t see them again for a long time. They said little but exchanged much in those last looks and tearful moments.

“I felt like that one step might be like leaping into another world—a world apart. It was so hard to take that step because some pieces in Shen Yun directly portray the persecution of Falun Gong,” Liang said.

For her, this was a reason to join the company—to use her talents to tell the world the truth about the CCP’s persecution of spiritual believers.

But this also put her family at some level of risk again.

“The CCP has countless ways to terrorize people and make their lives difficult, so I worried a lot for my parents’ safety. I felt I might never see them again unless the persecution ended and I could go back,” Liang said.

In that moment, Liang drew from lessons from traditional Chinese culture.

“Many famous people in history, when they set off to do something, they never considered whether it would succeed or fail. They’d look at it from a moral perspective,” she said.

“If it’s morally justified, they’d take it on. If it’s something that goes against their conscience or morals, even if it’s full of advantages, they wouldn’t do it. I always think of this when I think of the persecution.”

And, distressing as her experiences in China were, Liang says they deepened her understanding of her art and her ability to interpret music.

It was Liang’s mother who paved the way for her to become a musician. One day, as a young child, her mother brought her to a musical instrument store and told her to take her pick.

Liang closed her eyes, spun around in circles, and stopped and pointed at the instrument in front of her. It was pear-shaped, and she decided this was it.

By middle school, she placed in national competitions, and her winning streak continued through high school and college.

At the time, music for Liang—as it is for many young professionals today—revolved around the world of competitions. It was like a sport.

“We’d compete for speed, strength, and difficulty,” she said.

Since joining Shen Yun, her view has changed.

“This is something I gradually realized only after joining Shen Yun,” she said. When she used to play with a competitive mindset, she felt her music was restless.

“If I am restless, then whatever music I play will sound restless too. But if I can keep a calm and tranquil heart, then no matter how it’s played, it will still sound pleasant.”

Since joining the classical Chinese dance company, Liang has changed and matured as both an artist and a person. She attributes this to the atmosphere of traditional culture and the universal values of Shen Yun.

The company’s tagline this year is one that many have called bold: “China before communism.” The company’s mission has been, since its inception, to revive 5,000 years of Chinese civilization, each year showing audiences through music and dance the beauty of what was once called the Celestial Empire. Ancient China was deeply spiritual, and for five millennia, it centered around the concept of harmony between heaven, earth, and humankind. Perhaps that undertaking has always been bold.

“I truly believe that Shen Yun is a unique group of artists,” Liang said.

“Everything that Shen Yun does, Shen Yun’s persistence, influence, and legacy, along with the stories Shen Yun is telling, are the essence of traditional Chinese culture. They’re the most beautiful parts of the culture.”

It’s been an education for Liang as well; she has discovered many things about her heritage.

“In Shen Yun’s dances, I have discovered many values from traditional culture: respect for the heavens and respect for the gods, compassion, integrity, respect, wisdom, trustworthiness, loyalty, filial piety, honesty, honor, courage,” she said.

“These are the most basic values that people should have. Often, I feel that what Shen Yun expresses is like when you’re faced with hardship under impossible circumstances, amid seemingly insurmountable difficulties, can you carry on?

“Can you choose justice? Can you stand by your principles? The ancients have a saying, ‘I desire to live, and I desire to be righteous.’ When one cannot have both, one must ‘forsake life for righteousness.’

“My experiences growing up, and the experiences of Falun Gong practitioners, have shown me many examples of fighting for a just cause,” she said. “Like Shen Yun’s mission, like my mom’s actions back then, these have all inspired me to stay steadfast in my faith, and to persevere in doing what’s right.”

In 2018, Liang and her family were able to be reunited in North America, but the CCP’s persecution still continues.

After every performance, when the curtain goes up and Liang looks out at the audience, she remembers her reason for doing everything she does.