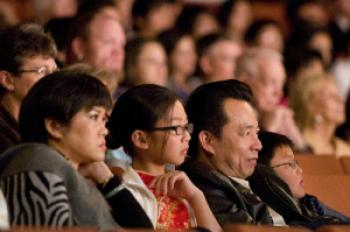 Ms. Zheng, an accountant, came to the United States from China several years ago.

She thought every facet of the New York-based Shen Yun's presentation of China's historical accounts, portrayed in dance and music, was superb.

She was especially touched by scenes that highlighted the plight of Falun Gong, a spiritual practice banned in China today.

“The dancing movements are very good, so are the colors of the costumes. I like the programs about Falun Gong, they are very meaningful.

"To those who do not understand Falun Gong, Shen Yun explains the principles of [living by] truthfulness, compassion, and forbearance. In addition, the lyrics [by soloists] also tell where human beings come from. I am very moved by it. I felt very sad for the Falun Gong practitioners being persecuted,” Ms. Zheng said, in reference to the vignette, Heaven Awaits Us Despite Persecution.

The program is about an innocent family that suffers when a father dies from persecution and is taken to heaven by celestial beings. The story reinforces an old Chinese belief that good is rewarded and evil is punished, even if not in this lifetime.

“True traditional Chinese culture is displayed and introduced in this show. Some of the dances we don't often see, like the dances of Tang Dynasty and Tibet, [Flowing Sleeves and Dance of the Snow-Capped Mountain]. Their dance movements reminded me of what I learned about the Tibetans long ago. I knew little before, and now I can enjoy so much of our culture, and I am happy.”

Flowing Sleeves is a look at an imperial courtyard in the days of the Tang Dynasty, while Dance of the Snow-Capped Mountain portrays a vigorous celebratory dance of the Tibetan steppes.

Ms. Zheng said other shows she had seen in China could not compare to Shen Yun performance.

"They are quite shallow in content, and not as deep or thought-provoking as Sheng Yun."

Furthermore, the full orchestra playing music of Western and Chinese composition swept her into another dimension making her feel "happy and moved."

Ms. Zheng also mentioned that Shen Yun will never be seen in China, a fact she found hard to comprehend.

"We cannot see shows like this in China. For one thing, the Chinese regime will not allow it. Second, where I came from, there isn't any show of such a high caliber.”

She believed the content of the show was upright and filled with justice, which would positively influence the Chinese.

"I feel that all Chinese should see this show and gain a better understanding of Chinese traditions. It will be a good experience for anyone who has an opportunity to see it.”

She hoped that Shen Yun will some day perform in China.

In presenting a show unsullied by communism, Shen Yun artists are dedicated to bringing to life a rediscovery and renewal of humanity's true, rightful heritage that has its foundations in China's divinely inspired culture.