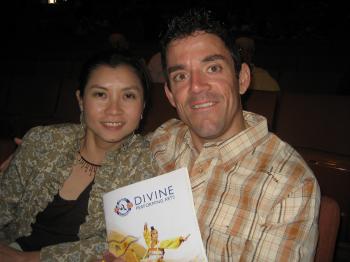 Financial Analyst: ‘It is optimistic’

PHOENIX—For the second night in a row, Shen Yun Performing Arts has inspired the audience at the Gammage Theatre in the ASU campus.

Mr. Booska, a financial analyst of a large corporation, and his wife, found the show to be both optimistic and entertaining.

"I like it a lot, it is optimistic to see the preservation of Chinese culture. There was a lot of energy there. I appreciate these people who are doing this.

"The costumes are very colorful and nice. The spring costumes were really nice with the blossoms and the fans. I thought that was really nice," said Mr. Booska.

Mrs. Booska said, "I'm Chinese, so I have been exposed to all the classical dances before, but this is different. I learned something new. I loved the costumes. I think the music and the scenery looked really great, they really give me a peaceful mind, and nothing can beat that, very beautiful."

Mr. and Mrs. Booska enjoyed the show so much they said they would return next year and bring family and friends.

Chani Blue contributed to this report.

This article was written with files from SOH Radio, a media partner of The Epoch Times.