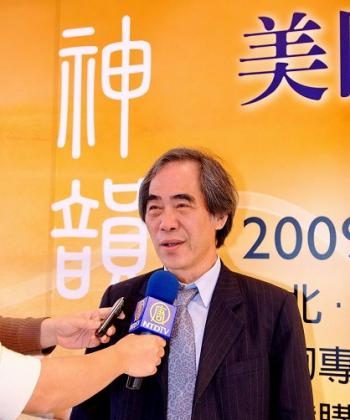 By Mike Liu and Yuegui Lai
Print
HSINCHU, Taiwan—As Shen Yun Performing Arts International Company was coming to the end of its tour in Hsinchu, many rushed to purchase tickets to see the show on March 21. Shen Yun’s mission is to rediscover and renew humanity's true rightful heritage and it has caused quite a splash in Taiwan’s scholarly circles. Mr. Chang Yuntang, Professor of History in the Graduate School of the National Tsing Hua University, came to Hsinchu Performing Arts Center to enjoy a really “soul enlightening” performance.

As a researcher, Mr. Chang believes there is a unique idea that Shen Yun is conveying through its performances. “Harmony among the universe, heaven and human, and the harmony among human societies, and the harmony within the small universe of each individual heart, is the strong idea that Shen Yun conveys.” He believed it perfectly meets the needs of modern society. “I think this is a Chinese traditional value, a value most countries and societies need to know. The value may also enrich an individual's body and mind through cultivation.”

“Each piece of the program has its own structure, yet with one clear subject of the relationship of heaven and humanity. Therefore they are all very phenomenal and enlightening. The first piece, The Five Millennia Begins speaks of the relationship between the divine and human beings, and the history of divine beings’ descent to earth,” Mr. Chang said.

He said what Shen Yun conveyed was immortal and precious, and was beyond all kinds of constraints. “The universal and immortal value cannot be categorized by different religions or beliefs.” Shen Yun has toured the world and performed nearly 300 shows. Mr. Chang said, “The great idea and philosophy that Shen Yun Performing Arts conveys will travel beyond time and space. It is an immortal value and that’s why Shen Yun is winning the hearts of all mankind.”

Mr. Chang decried our excessive reliance on technology and the problem of explosive knowledge in modern society. “The atheism which develops from science is creating lots of social problems and psychological anxiety. Shen Yun’s performance is simply getting to the point to 'cure the problem.'”

He said the dance, The Monkey King Triumphs touched him the most. “It presented an issue between divine and human beings by using a very familiar story among Chinese people. That is to say, it used the most common element to convey a cultural value that is beyond time and space. That would move the audience without question.”