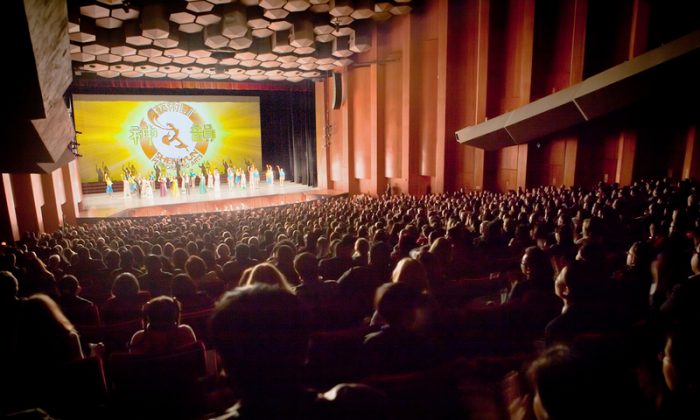 HOUSTON—”I want to say euphoric. It gave me shivers,” said Laosha Quaites after seeing Shen Yun Performing Arts a second time. It was “enchanting,” she said.

Ms. Quaites and Anitra Carter saw the New York-based company last year at the John F. Kennedy Center for the Performing Arts in Washington during their travels and said they had to see it again.

Ms. Quaites lauded several dances that made what she said was ingenious use of props—like fans mimicking waterfalls in one piece and handkerchiefs like fireworks in another.

“They weren’t dancing to perform. They were dancing to convey something,” Ms. Quaites said. “You would think they were actually living the moment they were in. That was also their passion for their profession as well … They’re submerged in their character.”

For Ms. Carter and Ms. Quaites, the performers were conveying a message that made them come and see the show again.

Ms. Carter said it was a message forbearance and compassion.

“It deals with compassion, for all mankind,” Ms. Carter said. “It’s very deep, and very meaningful.”

She also said the message was of the revival of authentic, traditional Chinese culture—and the performance transported her to an era of emperors of different dynasties—but which has been suppressed in China under the communist regime.

Because of this, forms like classical Chinese dance had been once nearly destroyed by the communist regime. Shen Yun, however, was formed with a mission to revive this culture.

“We just hope the message gets through to everyone,” Ms. Carter said.

Ms. Quaites said that from her perspective, by erasing culture the communist regime is “literally erasing all that they have been built off of, and forming something that will become haphazard.”

“All of the beliefs that have been built up—all the philosophies, the poetry. It would be unfortunate, highly unfortunate, if the communists were able to snuff out that flame,” Ms. Quaites said.

She was gratified to see the culture alive in Shen Yun today, portraying a “flame of inspiration.”

To Ms. Quaites, the performers conveyed inspiration “of hope, of light, of joy, of caring.”