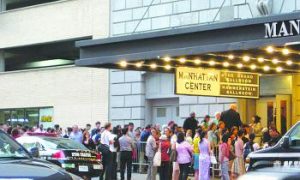 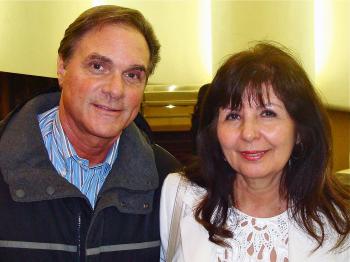 By Abraham Thompson
Print
SAN JOSE, Calif,—Shen Yun's New York Company continued to impress the audience as it received its third standing ovation in a row at the evening performance on Saturday, April 9, at the San Jose Center for the Performing Arts.

“I'm glad I bought the tickets,” commented Bob Mirolo, who was there to see the show with his wife Leigh. “We're enjoying it. The dancers are really, really good.”

Mrs. Mirolo also found it inspiring: “I've been to Asia. I said 'We're going back to Asia. We're going to China.'”

Mr. Mirolo was impressed by the dancers' body control. Mrs. Mirolo particularly enjoyed the dance Mischievous Monks, in which young monks find ways to have fun between their duties. She also liked “those beautiful angels,” or heavenly beauties, referring to the divine beings portrayed within the traditional Chinese cultural context of Shen Yun's performances.

Emcees Jared and Kelly provided the audience with some background and cultural information along the way, which the Mirolos appreciated.

“The thing that I think is really helpful is they have the video backdrop and the narration," Mr. Mirolo said. "Because of not speaking the language, it really helps me understand what it's about.”

Mrs. Mirolo agreed. “I enjoy … that they give you a little bit of information [so] that you know what's going on.”

Shen Yun's mission is to revive traditional Chinese culture through the performing arts, allowing the audience to leave with a greater understanding of China's ancient history. The couple appreciated the artistic aspects of the show, and also felt in tune with the performance's cultural messages. "How could you not [be]?” Mr. Mirolo said.

Both husband and wife agreed Shen Yun is a wonderful show and worth attending. “Beautiful,” said Leigh. “I would recommend it.”