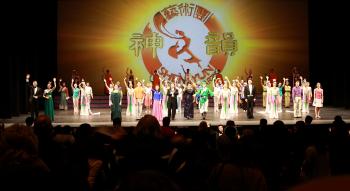 “I echo my husband. He said exactly what I wanted to say,” said Ms. Sun.

Among the pieces the couple particularly enjoyed were “Manchurian Elegance,” “Ladies of the Tang Palace,” and “Plum Blossom.”

“Visually stunning, and technically challenging because they have to wear the flower pod shoes, and the heel is in the middle,” said Ms. Sun, referring to the dainty chopine shoes from the Qing Dynasty worn in “Manchurian Elegance.”

The Shen Yun Orchestra, with its unique blend of Western and Chinese instruments, also came in for praise.

“I think it’s very good,” said Mr. Newton. “I like the traditional instruments—the erthu playing was superb. It’s certainly different from traditional western music, so it’s nice to listen to.”

Shen Yun was founded in 2006 with a mission to revive the true spirit of traditional Chinese culture.

Since then it has grown from 100 people in one company to 300 artists today, boasting three dance ensembles and three orchestras that tour the globe simultaneously presenting an all-new program every year.

The three companies will travel until May 2011 performing in cities across North America, Europe, Oceania, and Asia. Among the performing artists are winners of top international competitions in dance and music, and accomplished choreographers and composers.

Shen Yun will now leave Canada until the spring when it returns for shows out west. Touring Company, one of three companies Shen Yun has travelling the world, will now go on to perform in Buffalo and Detroit. 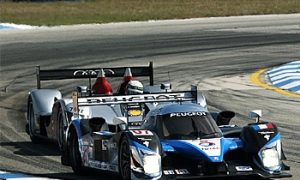 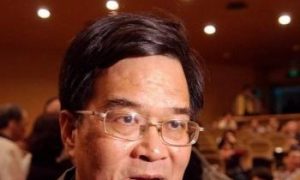