Shen Yun ‘opened my heart to the purity and beauty of the culture,’ Says Gaelic Singer 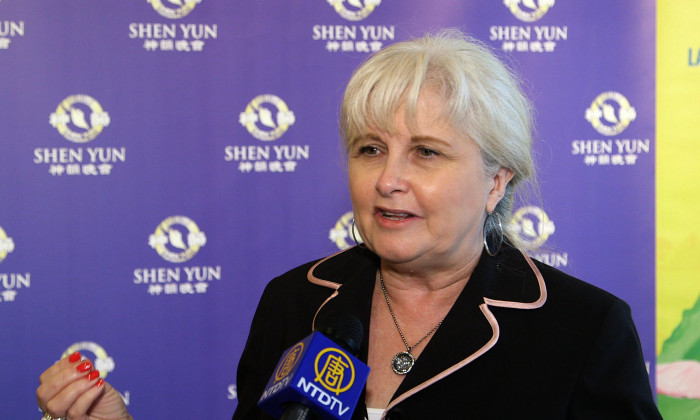 Gaelic singer Sina McKenna attended Shen Yun Performing Arts at the National Arts Centre in Ottawa on May 8, 2016, her third year seeing the classical Chinese dance and music production. “The beauty and the tranquility are the two words I am bringing with me today,” she said after seeing the performance. (NTD Television)

It was her third time to see the show, and she explained how watching the classical Chinese dance and music production touched her heart deeply.

“I let my own intuition and my own creativity flow, like a child does,” she said. “It was delightful! It just touched so much of my innocence and my heart. It opened my heart to the purity and beauty of the culture … and the dignity.”

New York-based Shen Yun is in its 10th year touring the world, with an all-new program every year, to fulfill its mission of reviving the traditional culture of China. It is a 5,000-year-old deeply spiritual heritage that is expressed through noble principles and ideals such as benevolence and justice, propriety and wisdom, and respect for the divine.

This spiritual essence spoke in a profound way to Ms. McKenna.

Her thought before coming to the show was, “I’m going with an open heart like a child—a pure heart—and just let all the beauty and the spirit of the performance come into my heart,” she said.

Then, while watching the performance, “I did a little bit of meditating too and I made it sort of a spiritual exercise almost,” she said.

As a musician, Ms. McKenna was moved by China’s two-stringed violin, the erhu, an instrument that has a history of over 4,000 years. Even though it has only two strings, it can convey a wide range of emotions and is capable of imitating sounds from chirping birds to neighing horses.

“That wonderful instrument! That’s the thing that really touched me,” she said, adding that she closed her eyes and “just let it pour into me.”

“I just breathed all of that music in and that is something I’m going to be pursuing—listening to more of that instrument. Two strings!”

The unique Shen Yun Orchestra also impressed her, as it creates a fresh, harmonious sound from blending musical instruments from the East and West. “A Western orchestra plays the foundation, while traditional Chinese instruments lead the melodies,” explains Shen Yun’s website.

“I also started to understand the combination of Western music and the Chinese [music],” said Ms. McKenna.

And as a Gaelic singer, she noted that the music she sings is also based on the five-tone pentatonic scale that is the basis of traditional Chinese music.

“We sing the pentatonic scale, [which] is the old scale,” she said. “Listening to the Chinese instruments today, I started to understand them more on a deeper level.”

“I feel calm, tranquil,” she said, adding that she wanted to explore more about the traditional Chinese culture.

“It really opened up a door really for me. That’s what I’m taking home,” she said.

“The beauty and the tranquility are the two words I am bringing with me today. Spirit. Beauty. Tranquility. Fabulous!”