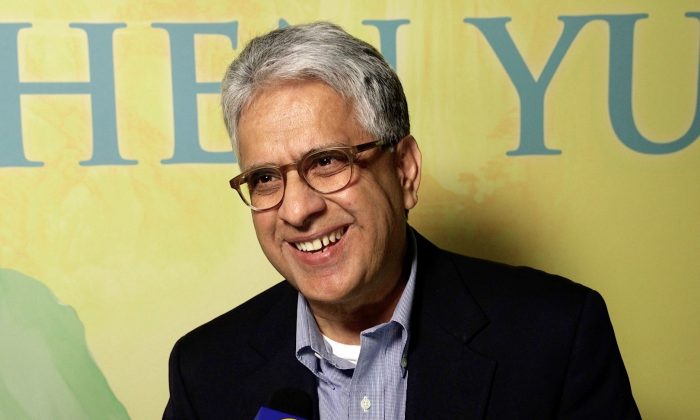 Maban Batla, a business instructor at Indiana University of Pennsylvania saw New York-based Shen Yun at The Benedum Center for the Performing Arts, on May 10, 2016. (Courtesy of NTD Television)

PITTSBURGH—Beyond the beauty that Shen Yun Performing Arts offers theatergoers, the classical Chinese dance and music company prompts people to consider sincere and ultimately important questions: Why are we are in this world, and, where we are going from here? These are the philosophical points that Dr. Madan Batra appreciated on May 10.

The marketing professor at the Indiana University of Pennsylvania saw New York-based Shen Yun at The Benedum Center for the Performing Arts.

He enjoyed the dances performed in exacting detail and was impressed that they delved into spiritual ideas dealing with divinity and faith in meditation.

Dr. Batra said the performance brings home the tension between the traditional culture and the modern way of looking at it. The presentation of the traditional beliefs he considers a noble goal.

Shen Yun’s mission is to unearth a buried civilization which had thrived for thousands of years until the communist regime took power in the middle of the 20th century. The renaissance of Chinese culture that Shen Yun presents was traditionally believed to be a gift from the heavens, and China was once known as the Celestial Empire for this reason.

Each of the dances, whether folk or classical, at least hints at this connection between the divine and humankind. In “Tang Dynasty Grace,” for example, the robes of court ladies were said to be inspired by heavenly attire.

In some dances the theme is very obvious. In the dance “The Steadfast Heart,” meditators are disrupted and one is arrested and then tortured by communist regime police for his faith. His spirit nearly shattered, the man is blessed by a vision of heaven.

Dr. Batra was very touched by this dance and as well as the lyrics to the song “What You Are Here For?”

“Why must life be so tiring? From whom are we really here?” the song sung by baritone Qu Yue begins.

We forget to pay attention to these higher ideals, Dr. Batra said. Our stressful lives distract us from these questions. “Sometimes we don’t have any answers, but we need to go an extra mile to try to look for answers, and I think this show, from that viewpoint, helps us think that way,” he said.

“Oh, this is beautiful,” said Dr. Batra at intermission. “I’m glad I came here. I know the show comes here every year for the last few years but I never got a chance to come to this show, I’m glad I came.”