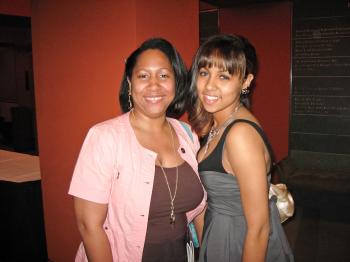 Ms. Lindsey and her daughter came to the first Shen Yun show at NJPAC in Newark on May 22, 2010. (Joshua Philipp/The Epoch Times)
Arts & Culture

An Experience of Chinese Culture Through Shen Yun

Shen Yun’s performance of classical Chinese dance and vocal music, based on China’s 5,000 years of culture, brought a colorful array of costumes and dance to the stage.

“It was awesome,” said Malika Lindsey, an analyst who came to see the show with her daughter. “I liked the choreography, I liked the colorful costumes.”

Lindsey said at first that she wasn’t too sure what to expect from the show, but went out of her interest in martial arts and Chinese cinema. “I was wondering, OK, is it going to be in another language, am I going to be able to follow it all; and it was great. I would come again.”

Shen Yun includes segments of ancient legends, ethnic dances, vocal music, and the culture from China’s various dynasties and ethic groups. Between each segment, a Chinese and an English emcees give a brief description of the performance.

“I will try to encourage my friends and family to come and see any performances they may have,” said Lindsey, whose daughter Jocelyn added “It was pretty good. I didn’t really know what to expect. I just came with my mom, but I liked it.”

The overall show has a positive air about it. It presents themes of kindness, compassion, and courage which are brought to life through story and song. It portrays hope amidst adversity, kindness amidst hardship, and courage amidst challenges.

Jocelyn, currently a student, said she was particularly moved by a segment entitled Nothing Can Block the Divine Path,  which portrays a mother and daughter who are arrested for practicing Falun Dafa.

Jocelyn said she liked “The whole story, like how they played it out, it was different, nothing that I’m used to really, so I enjoyed it.”

“All their story lines were great, pretty much, so I liked it,” she said.