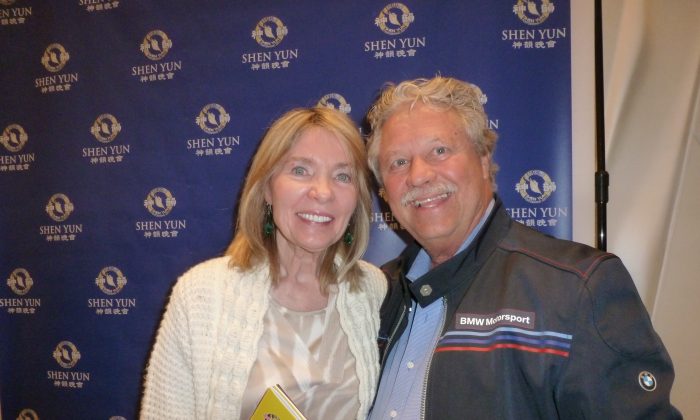 The couple had just seen New York-based Shen Yun Performing Arts on March 19, during its 3-day run in San Antonio, at the Tobin Center for the Performing Arts. They felt moved and inspired through sheer beauty.

“My wife and I are both water people,” Mr. Kajs said, pointing out one dance as an example. Female dancers donned blue and white costumes, creating waves between the sea and sky with long, silky fans and tumbling techniques. The dance “Fairies of the Sea” evoked the beauty and serenity of a poem referencing the waves of the ocean.

“We love the water and ocean and lakes so that was very moving,” Mr. Kajs said. It made him want to experience more of this side of China.

On a cultural level, Mrs. Kajs felt seeing the 5,000 years of Chinese civilization presented through the performing arts was a reminder that, first of all, geographically there is much to consider beyond the United States.

In Shen Yun, this culture was depicted through beauty, in “the costumes, the movement, the scenery, everything is very moving.” “Looks very spiritual,” she said.

For Mr. Kajs, it was inspiring to learn of the culture’s divinely inspired past, which is so different from the current China under the communist regime. He said it also gave him greater understanding of China’s current situation, as many audience members often say they had not known the traditional beliefs and culture were still oppressed.

Mrs. Kajs said that through the stories there was also the theme of fighting evil. Mr. Kajs agreed; for him, this was the big message.

“It’s a spiritual program. It’s uplifting and it gives you a greater feel. I think we are all part of humanity,  all of us. And we are all a big web and a network whether it is in United States, China. We are all part of the same universe,” he said.