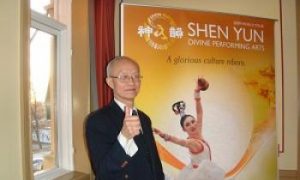 Former TV Host: 'It's astounding to see such a high-class performance'
0 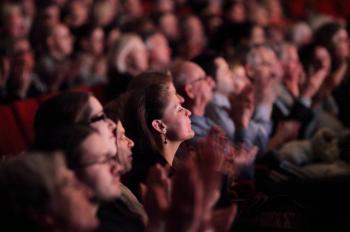 ‘The music was perfect,’ Says Mayor

MONTREAL, Canada—A gift from his wife of a ticket to see Shen Yun Performing Arts was a wise choice as far as Sainte-Anne-de-Sabrevois Mayor Clement Couture is concerned.

“It was a nice gift for Christmas,” he said, after seeing the renowned show that travels the world showcasing China’s traditional culture at Place Des Arts on Friday night, Jan. 7.

“I thought it would be a great show to offer as a gift,” said his wife, Solange Gardner.

“I enjoyed the show very much. I think the girls were really beautiful, and I enjoyed also the dancing of the boys. The boys, I think, were very athletic,” she said.

“Very athletic, but very good,” said her husband, who was a Member of Parliament with the Progressive Conservative Party from 1988 to 1993.

“The music was perfect,” he added.

The Shen Yun Orchestra is unique in that it combines Western and Chinese instruments, such as the erhu and pipa, or Chinese lute, believed in ancient China to be a celestial instrument.

Mr. Couture was also impressed by the bilingual emcees who introduced each piece.

“It was well explained, in both English and French. We followed up quite well.”

Shen Yun was founded in 2006 with a mission to revive the true spirit of traditional Chinese culture. Since then it has grown to 300 artists, boasting three dance ensembles and three orchestras that tour the globe simultaneously presenting an all-new world-class program every year.

The three companies will travel until May 2011 performing in cities across North America, Europe, Oceania, and Asia. Among the performing artists are winners of top international competitions in dance and music, and accomplished choreographers and composers.

Reporting by Donna He and Joan Delaney.