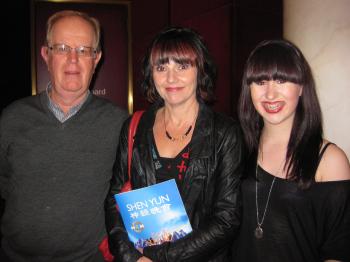 MELBOURNE, Australia—It is the final performance of the Shen Yun Performing Arts in Melbourne before the company leaves for Brisbane. There was a full house at Sunday matinee performance and among the very responsive audience were dancers and singers.

“It was great, amazing! It’s the background and effects and the sound that brings it all together. Definitely something I’d aspire to. It’s not just about, the steps and choreography; it’s about how you display and how you act it out as well,” said dancer Emily Collett.

Stories that have been handed down over thousands of years were acted out on stage.
“The dancers told a story,” said Emily’s father Frank, “which I found most interesting. I think it took you back to the traditions of the country.”

Very popular with the audience in the second half of the program was the erhu—a two stringed traditional Chinese instrument in a solo performance. Both Emily and her father agreed it was “sensational.”

But it wasn’t only traditional stories that were told. Astounding Conviction tells a present day story of a lone man holding a banner in peaceful protest in Tiananmen Square and his steadfast belief that inspires divine beings to help him.

“I really liked the one, the conviction one.” said Emily. “I liked that because I felt it really told a story, and it was really interesting and it really made you feel like you were there and being involved in it.”

Singer Lyn Abels also appreciated the Shen Yun performances. “I loved the dancing. I thought it was very beautiful the way they move. The costumes are gorgeous, they’re so pretty, and they look elegant.”

The overall beauty brought admiration from pediatrician Sabine Hennel. “Really dynamic and vibrant and the physical prowess of the dancers was amazing” she said. “I was really surprised at how moving I found parts of it. I’ve not been to this sort of visual performance and particularly, the dance around the concept of the persecution—very moving, really well done.” It was the most memorable dance for her. “I think because of the strong message it sends and how real it is,” she said. “How unjust it is for people to be persecuted for religious belief or any belief.”

She also appreciated the presenters coming out between each dance. “It helps explain the cultural content” she said.

Sabine’s daughter Annika, summed up the whole afternoon’s performance in a few words. “I loved them all,” she said.

With reporting by Peta Evans.

Shen Yun Performing Arts New York Company will perform at Melbourne’s Arts Centre State Theatre until May 30, before moving on to Brisbane for three shows, June 1-2, bringing the Oceania leg of its 2010 World Tour to an end. For more information visit ShenYunPerformingArts.org