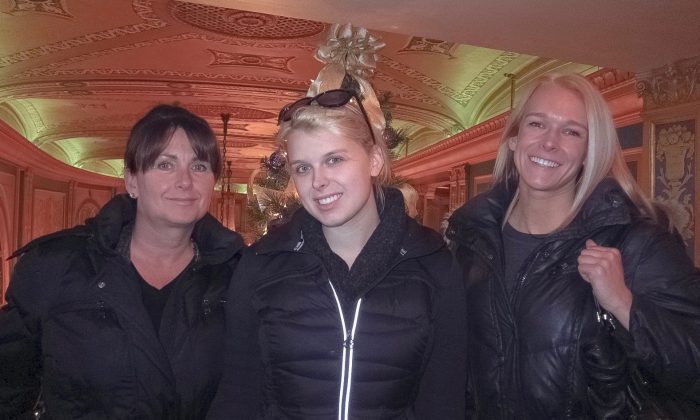 Carrie Tabbey and her daughters, Maegan and Melissa, enjoy a night of traditional Chinese culture through Shen Yun performance at the Detroit Opera House on Dec. 2, 2016. (Valerie Avore/Epoch Times)

DETROIT—Shen Yun Performing Arts Touring Company brought a mother and her two adult daughters out for more than a night of excellent entertainment at the Detroit Opera House on Jan. 2—it was a night to step back from the hectic pace of modern life and reflect on the fundamentals of traditional culture.

What makes Shen Yun special is that it takes as its source material stories and legends that go back 5,000 years, to the beginning of Chinese history. This history has been passed down uninterrupted, making it possible for Shen Yun to present China’s ancient culture on stage, as the company’s website explains. Shen Yun Performing Arts is considered the world’s premier classical Chinese dance company.

The three women reflected a lot about what they saw on stage and how it relates to current life.

It is very complex, and it’s a very beautiful culture.
— Kerry Tabbey

“It is very complex, and it’s a very beautiful culture. … I feel that there is a lot of really rich heritage and people that are devoted to their families and tradition,” said Kerry Tabbey, the mother and a nurse anesthetist.

“I feel sad that they have been so oppressed by the communist government. That’s how I feel,” she added, referring to the Chinese Communist Party’s efforts to destroy all that’s traditional.

Through a succession of campaigns, the communist retime has attempted to completely undermine China’s traditions for the sake of promoting atheism and disharmony among man, nature, and the heavens, explains Shen Yun’s website. Reviving true traditional culture is in fact Shen Yun’s mission and as a result, even though the New York-based company performs on some of the world’s most prestigious stages, it cannot perform in China.

Her daughter Melissa Tabbey, who works for the international advertising firm Crispin Porter + Bogusky, commented that she enjoyed how the history were conveyed through dance. “It was an interactive way to show a lot of China’s history and important values and beliefs,” she said. “It was really beautiful, really traditional, which I liked.”

Thinking about how the values and beliefs apply to today’s world, she said: “Life seems to move so fast, especially with the technology. It’s kind of refreshing to see that people still believe that nature is one of the most beautiful things you can experience.”

“Especially working in advertising, it is really fast paced, so it’s really nice to watch something like this that is so different. It makes you calm, relaxed, and able to appreciate beautiful things,” Melissa added.

“I am always being surrounded by scientific things. It is nice to see something that just brings you back to the base level—it was just nice to view good people,” she said.

The company explains that its dance pieces depict various traditional values and morals such as justice, propriety, wisdom, respect for the heavens, and divine retribution.”I liked that they pulled out the struggle between good and evil, and the triumph of good,” said Mrs. Tabbey.

Another core value is goodness or compassion. Maegan reflected that we “can loss so many core values and get swept up in today’s world, and you can lose that foundation—goodness.”

“You really feel the culture through the energy. It was tangible somehow when you were watching them,” she said.