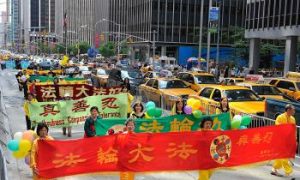 A Colorful Parade Lights Up Manhattan
0 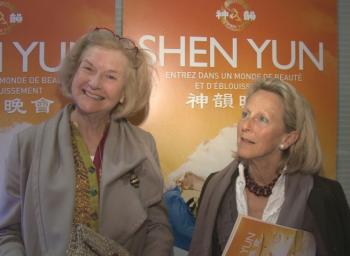 Truuske Verloop, an organizer for the TEFAF Maastricht art and antiques fair, along with her friend Carol Bentink, who is also involved in TEFAF. (Courtesy NTDTV)
Arts & Culture

Truuske Verloop, an organizer for the TEFAF Maastricht art and antiques fair, along with her friend Carol Bentink, who is also involved in TEFAF, came to see the show on Tuesday evening.

“So delicate, don’t know whether that is the right word. All colors, all movements, all thoughts behind it—it is too much to be able to comprehend in just one time I think.”

TEFAF Maastricht presents genuine masterpieces from 263 of the world’s prestigious art and antiques dealers from 17 countries and is one of the world’s leading fine art fairs.

“There is so much expression that we might not understand because we might not be able to tell from the faces; that is being shown by movements and music,” she said.”

She noted the variety of movements in classical Chinese dance presented by Shen Yun and admired the dancer’s skills.

“All those movements from every act and it follows each other so quickly and is so diverse that one starts to wonder how it is possible they remember this,” she said.

“And the singing I also found really beautiful, good tenor, good soprano, wonderful,” all of which make Shen Yun a “complete” show, she said.

“Very complete picture of something totally new, for us anyway.”

“That was really exceptional and a superb sound, indeed,” she said.

“Without it, you couldn’t think of it, but especially those little mini-sounds, I found really impressive.

What was particularly interesting to her was the integration of traditional Chinese instruments in the orchestra, which starts with classical Western instruments as its foundation.

“With lots of messages … spirituality; you can feel an overtone of respect for each other, at least that is how I experienced it.”

What makes Shen Yun “truly remarkable,” she said, is that it “goes further than just the looks.

“There is something delightful radiating from it,” she said.

“Very beautiful, wonderful. Very different from what we know and see around us.”

Ms. Bentink said she was really impressed by the delicately synchronized dance movements, saying that this aspect made a “huge impact” on her.

She explained the way the female dancers float across the stage, as if they have wheels underneath their feet, and they moved altogether and very elegantly.

“The grace that I find delightful, that is what I enjoy the most,” she said.

Watching Shen Yun made her feel like she has a lot to learn and read, and the show was truly “an eyeopener”.

“This is unbelievable that a group of people can accomplish this,” she said.

Ms. Bentink thought of her granddaughter who lives in Switzerland when she learned that Shen Yun Performing Arts Touring Company will be next playing in Neuchâtel, Switzerland after the Louvain-la-Neuve shows end.

“I think she will dream different dreams than [what] we just dreamed tonight. … It is so fascinating.”

Ms. Verloop said she will also be recommending the show to others and hoped that “as many people as possible” come to see the show.

“More people should see this,” she said.

Shen Yun Performing Arts Touring Company will perform in Louvain-La-Neuve, Belgium, from April 30 to May 11.