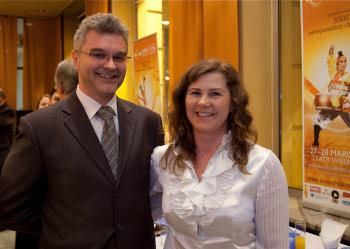 Banker: ‘The scale of the colors was stunning’

LODZ, Poland—Described as a “fantastic interlude” after having just come out of Poland’s winter, Mr. Janusz Lizak, a manager for Internet services for one of the biggest banks in Poland, said that the opening night’s performance of Shen Yun Performing Arts at the Teatr Wielki W. Lodzi on Friday evening, March 27, was a joyful spring atmosphere, with a full scale of colors.

Ms. Iwona Lizak, who also works in the banking industry, accompanied her husband to the show and the VIP reception held afterwards. She commented on the beautiful scenery throughout the performance, and Mr. Lizak adding that what impressed him the most was the colors of the costumes, saying, “The scale of the colors was stunning.”

Mr. Lizak said that they were curious about Chinese culture, as one is about such faraway places. “It is a beautiful country and this [is a] message about such a charming country. It would be a shame to destroy any of it, the whole culture is beautiful … and it should preserve this splendor.”

Commenting on the dances that depict tales of courage in modern day China, Mr. Lizak said that the message was presented “in a very light way. There was joy from the dance … There was a message, and it was quite deep."

What he liked most about the show was the beautiful dancing and the colors of the costumes, commenting on the “light way they were dancing. Wonderful!”

The Shen Yun dancing is based on Chinese classical dance and includes some of China's numerous ethnic and folk dances. In addition to going through intensive professional training to master the dance techniques, the dancers also need to understand and imbue their dances with deeper resonances of traditional Chinese culture. As a result, they are able to bring the goodness and beauty of Chinese culture to life on stage, and let audiences of different ethnic backgrounds see the true spirit of Chinese culture.