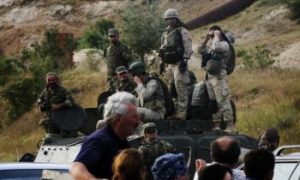 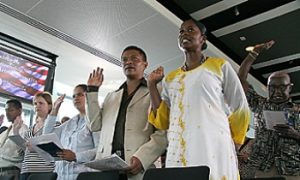 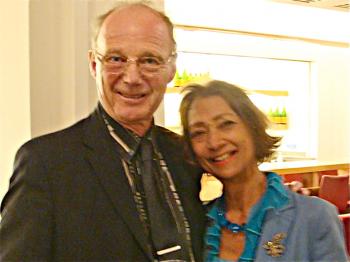 Sales director Robert Stephenson and his wife Alicia were at the matinee session on Saturday, April 9. (He Bin/The Epoch Times)
Arts & Culture

Sales director Robert Stephenson and his wife Alicia were at the matinee session on Saturday, April 9. They were particularly impressed by the opening performance, When the Kings followed the Creator to Earth.

"I think it was a great opening, I did like it—so pretty, so colourful. Beautiful clothes," Mrs. Stephenson said.

Her husband had a similar impression. "I loved the dancing and the colour. I am very interested in the scene with the police,” he said, referring to one of the dances which portrays the current situation of Falun Gong practitioners in China being persecuted for their beliefs.

The New-York based company travels around the world, reviving China's lost art forms through the highest levels of classical Chinese dance. Much of China's rich artistic expression has been destroyed under decades of Communist rule that continues today, and Shen Yun hopes to repair that damage by presenting the pure beauty of the ancient culture.

Mrs. Stephenson said she enjoyed “stepping through history. I like the dancing, and the showing of what's happening in China today – that's beautiful."

Mr. Stephenson agreed, saying he was enjoying "the tracing of the history of earlier times, like the terracotta soldiers and linking it all together."

How fit they all are

"Very graceful, it's really interesting to see the difference in the dance between the men and the women. It's amazing how delicate the ladies are when they dance. It makes them smile, so very nice, very nice…how fit they all are," said Frank.

"The orchestra is obviously fantastic. The colours of all the outfits, I know if my wife was here she'd be talking about it. Visually it's good entertainment. I like the screen in the back," Frank said.

"I know that China has a lot more depth to the meaning of anything. I can see it,” Frank said. “I will probably read the brochure after the show and it will probably help me understand what I'm seeing."

Reporting by He Bin, Mary Mahn and Raiatea Tahana-Reese.