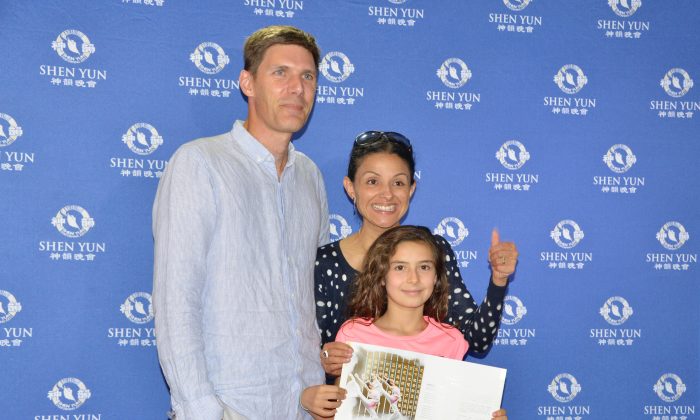 AUCKLAND, New Zealand—When the Reeves family left the Aotea Centre, ASB Theatre on Feb. 13 they took away something special, an inner peace from experiencing the wonder of Shen Yun Performing Arts. They found it very uplifting.

Doctor Maria Reeves, a CEO of a medical group who specialises in skin cancers attended with her husband Andrew Reeves and daughter Elena. She said “for me it was very meaningful; beautiful! It’s absolutely beautiful.”

Mrs. Reeves said she had never been exposed to the real Chinese culture before but could understand the traditional China and the communist influence today.

Traditional Chinese culture had been passed down for thousands of years until communism systematically brought it to the brink of destruction. The Shen Yun website explains, “Forcing atheism upon society, the Chinese Communist Party has for decades launched various campaigns to destroy not only cultural sites, temples, and relics, but also the Chinese people’s belief in virtue and faith in the divine.”

Ms. Reeves was deeply moved by the Shen Yun performance with messages of good wins over evil, benevolence and justice, propriety and wisdom, respect for the heavens, and divine retribution. She felt Shen Yun could transform the audience and make them good from within and help them live a better life.

The level of real beauty displayed by Shen Yun’s performers often has theatre goers describe feelings of lightness, a relief from the load of everyday life and Ms. Reeve experienced this saying. “I was feeling very heavy when I came … I feel very much at peace. It really took the weight out of my shoulders. I’m actually feeling so relaxed very at peace, that’s the meaning to me, peace.”

She continued, “I feel really deeply moved … I think the whole thing just signifies divine, it signifies a culture that shouldn’t die,” she said. “It was just very beautiful, and it was very peaceful. I noticed also the passion and commitment to teach that.”

Mr. Reeves, an engineer appreciated the technical aspect of the digital backdrops saying it’s the “first time I’ve seen something like that electronic background … it worked very well and the animations coming down and performers appearing, I enjoyed that.”

Shen Yun website states, “Every costume in a Shen Yun performance is presented with brilliant colours, displaying a splendid spectacle. They use bright colours to tailor and recreate hundreds of new pieces each season. Every detail is given meticulous attention and is a result of artistic inspiration.”

The Reeves took their daughter Elena, who also enjoyed the performance. She said, “It was beautiful, fantastic.”