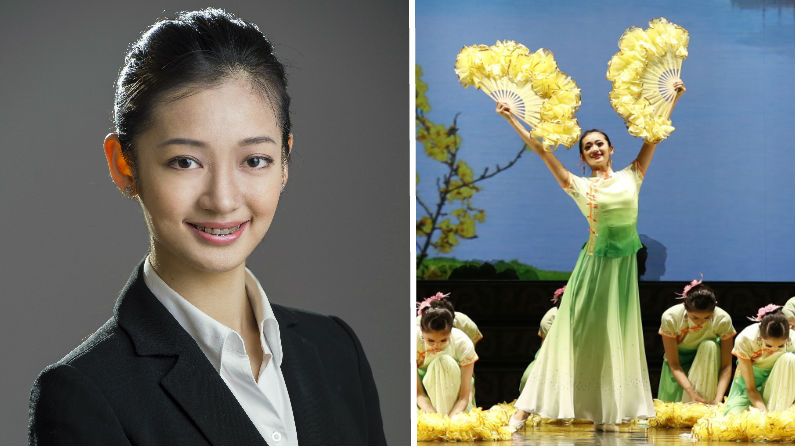 CANBERRA—Sitting in a café in Australia’s capital, Rebecca Jiang looks like any other young woman having a casual brunch on a Sunday. You wouldn’t imagine that she has already traveled around the world after mastering the various forms of classical Chinese dance and is now an established dancer for Shen Yun Performing Arts.

Jiang, whose parents hail from China, spent most of her formative years in Australia’s capital city of Canberra, defined by its role as the meeting place for the nation’s people and its lively university scene. It was in this vibrant environment that Jiang found her passion for classical Chinese dance. Although her journey started with gymnastics training at the age of eight, it wasn’t until she first set eyes on Shen Yun as a young teenager that Jiang found her niche.

“When I first saw Shen Yun, all I wanted to do was learn how to be as graceful and beautiful as the dancers on stage,” she said.

Shen Yun Performing Arts’ mission is to revive 5,000 years of rich Chinese culture. By depicting stories through song and dance, the company seeks to connect audiences with a traditional culture that has been suppressed under six-decades of communist rule in China. Established in New York in 2006, Shen Yun now has several troupes that travel the world, with each having a full set of dancers, orchestra, solo artists, and musicians.

This is Jiang’s 11th year at Shen Yun. She has performed in over 1,200 shows, including at top venues such as New York City’s Lincoln Center and Washington D.C.’s Kennedy Center. With her hectic lifestyle, Jiang said she has barely noticed how the years have flown by now that she is living her dream.

“Everything just happened so quickly. I’ve never had the time to step back and consider it all!” she said.

The years have seen Jiang accomplish many feats. She has now refined the art of classical Chinese dance, traveled across 5 continents multiple times, and has starred as the lead dancer in various acts of Shen Yun’s performances.

These achievements were cultivated through hard work and diligent studying of the arts. This hasn’t been easy for Jiang, who confesses to being an insolent child.

“Before I danced, I was lazy and never gave much effort for anything,” said Jiang.

“But dance has taught me how to work harder and be more independent.

“Dancing isn’t a skill that just improves with no effort. If you don’t practise, your body won’t be very agile, so I had to perfect my moves and techniques by doing them repeatedly.”

If you watch some of the aerobatic tumbles, leaps, or flips that Jiang does on stage, you will certainly understand the need for constant practice.

Even with her hard work and extensive experience, Jiang believes it’s not enough to only know the technique—you must also understand the deeper meaning of what you are trying to represent.

“In our Mongolian Bowls program, I was the lead dancer. I had a move where I would pour milk tea into a bowl right before my final pose. It actually signified that I was serving milk tea to our guests (the audience), which was a portrayal of Mongolian hospitality.

“Before I learned that piece of information, all I was focused on was not letting the milk tea spill everywhere,” she said.

Jiang is now accustomed to leading dances and being the focal point of the audience’s gaze. But she says there is more to the role than simply getting her moves right.

“When you’re a lead dancer, you tend to be in front and centre, so everyone else is following your lead. It’s important how I complete my dance moves and the timing of my dance moves, because I’m leading others,” she said.

Leading on stage is one thing, but Jiang also has an important role behind the scenes. As a veteran dancer her guidance and experience has helped develop the wealth of talent coming through Fei Tian Academy of the Arts, the training ground of Shen Yun Performing Arts.

Having started in Fei Tian as a young woman, Jiang hopes to return the favor of her many mentors over the decade.

“When I first joined Shen Yun, I was one of the youngest, and I had many older sister figures to look after me,” Jiang said.

“But as the years went by, many younger people joined. I went from being looked after, to being responsible for and looking after others.

“I now spend a lot of my time helping the younger, less experienced cohorts in terms of dance but also in everyday life.”

Jiang’s leadership will be more valued than ever at the end of the year when her troupe sets off on their annual tour with a whole new program. Having traveled to over 25 countries, Jiang is no stranger to this process.

While Jiang has enjoyed each of the countries she has toured with Shen Yun, she said that Japan resonated with her the most.

“Unlike mainland China, Japan has much of its history and culture preserved. It also shows in the people there who are also humble and polite,” she said.

This undoubtedly strikes a chord with Jiang, who herself is on a mission to revive her own native culture through dance.