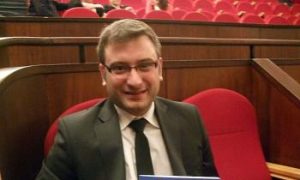 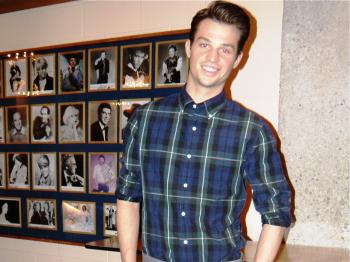 KITCHENER-WATERLOO, Canada—One of Ballet Victoria’s principal dancers, Robb Beresford, came to enjoy the last presentation of Shen Yun Performing Arts at Centre In The Square theatre Tuesday evening and gave his professional take on the show.

“It’s colourful and the dancing is really spectacular. So is the music,” he said.

With over 15 years of experience in ballet and performing with various touring groups including his three seasons performing with Victoria Ballet, Beresford could appreciate the performance of New York based Shen Yun.

“I’ve never seen any classical Chinese dance before, so it’s a new experience and I really liked it.”

The dancer was joined by his father, retired businessman Greg Beresford, who also enjoyed the night’s presentation.

“I think the show is not only very colorful, but it’s full of energy,” said the elder Beresford.

“The athleticism by itself is amazing. Watching those people dance puts a whole new level to dancing ’cause they’re that athletic. So it’s really a treat to see it,” added Mr. Beresford.

Joanne Hines, an investment advisor said that Shen Yun is ‘actually quite informative and educational.’

“The culture is quite fascinating … the dances were very delicate, it’s graceful,” said Hines about the dancers that Tuesday evening.

Hines found the introductions to the dances by Shen Yun’s two multi-lingual emcees informative and said they helped her to understand each dance,.

With reporting by Becky Zhou, Matthew Little, and Kristina Skorbach.

Shen Yun will go on to Montreal for four shows from Jan. 7 to 9 and then Toronto for five shows from Jan. 13 to 16. For more information, visit ShenYunPerformingArts.org