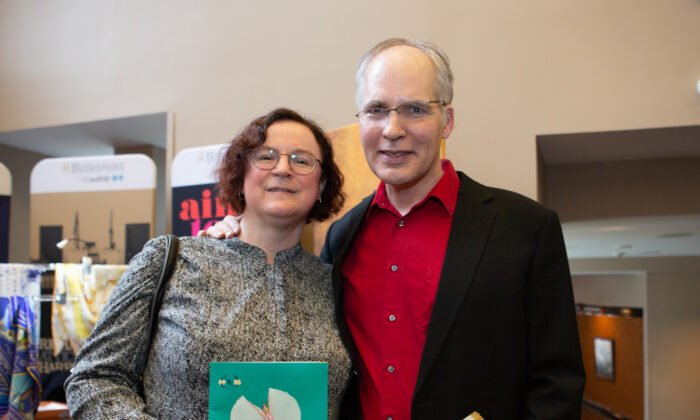 Amy and Ernest Stadler, husband and wife, both wanted to return to see Shen Yun again after their first performance at The Hippodrome Theater in Baltimore on Feb. 1, 2020. (Lisa Fan/The Epoch Times)

BALTIMORE—For years, many have noticed colorful posters and advertisements in their city for a certain classical Chinese dance company—Shen Yun Performing Arts—and have been curious about it. Tonight, one couple took a leap of faith, enjoyed the performance thoroughly, and are now encouraging others, “it’s worth coming for many reasons.”

“I was really surprised. I didn’t know what to expect, but I really enjoyed it,” said Ernest, a computer business analyst. “I liked how colorful the outfits were and the acting, the way they portrayed things without saying anything, you know, was very funny. … I was surprised, I’d go back again next year.”

“I thought the show was great,” said his wife Amy, a bookkeeper. “And I’m really feeling like I’m getting a taste of like an authentic Chinese experience and I love the cultural exchange. I think it’s so healthy. Especially in this kind of time where there’s so much animosity and bad feelings. I think this just made everybody feel good and people were laughing. It was really a great experience.”

Shen Yun’s orchestras, of which there are seven, one for each of their touring companies, are uniquely comprised of Eastern and Western instruments.

According to Shen Yun’s website, “First, the Western orchestra serves as a foundation, accentuating the distinct sound of Chinese instruments. Second, the bedrock of soul-stirring melodies from the ancient Middle Kingdom is fully brought to life by a Western symphony. This is what makes Shen Yun’s music unique and is a new frontier in classical music.

“Traditional Chinese music emphasizes the expression of inner feelings,” the website continues, “the ancients always used musical instruments to relate their states of mind. Western music, meanwhile, focuses on the overall effect of the musical ensemble.”

Because traditional Chinese culture is, at its essence, deeply spiritual, the state of mind that Shen Yun artists aim to relate through their art forms, including their song lyrics, is one that’s divinely-inspired.

“I liked the values in the songs,” Amy said. “They were inspiring, even though they had sad parts. But they were, they left you inspired to do more and to be more open. But just the idea of people, everything was ‘doing things together,’ you know what I mean?”

“I loved like [Ernest] said, too, the colors and the way all the dances were very group-oriented,” she continued. “The effect was multiplied when it came to doing the dances and such.”

Ernest said he appreciated the stories in Shen Yun that depict the 20-year-long persecution of a group of spiritual believers in China. Shen Yun artists themselves adhere to the spiritual discipline known as Falun Dafa, an ancient method of self-refinement that teaches moral principles and energy-strengthening exercises. Falun Dafa practitioners are among the worst targeted by the persecution of people of faith carried out by the Chinese Communist Party. Shen Yun cannot perform in China today due to the persecution.

“I found it interesting and inspiring,” Ernest said, “that how, when they were being persecuted by the communist government, they still used the dancing to sort of keep going, to keep the tradition alive. Even though [Shen Yun] can’t perform in China, they perform it here—it keeps the history alive, so I really enjoyed that part of it.”

Amy said she’ll be taking home more than colorful memories of Shen Yun. She felt the performance had a hopeful and inspiring message for life.

“I’ve wanted to come to the Shen Yun show for years! And it’s the first time I’ve gone and I think I’ll be able to come away feeling like I’m glad I went and I would come again. I come away feeling a lot less like it’s ‘us and them,’ you know. Americans and Chinese, you know, there’s this battle. I felt like this is humans, humanity, and everybody was a part of it and it was really inspiring in that way.”

“If you’re not sure what [Shen Yun] is,” Ernest said, “because I was not sure what it is, it was very, very, fun and enjoyable and you’ll learn something, too. And if you’re like me, who’s not as cultured as [my wife] is, you’ll come away feeling like you’ve learned something and you want to learn more.”

Amy agreed. “I would say, it would be worth coming for many reasons. For the dance itself, I mean it is just so, so acrobatic and so much talent there and also just the feeling, leaving feeling good and feeling inspired. And I would definitely recommend anybody coming to see it. Especially if they’ve always wondered, like they’ve seen the posters or something and said ‘I wonder if that’s good?’—It’s good. Go!”

With reporting by Lisa Fan and Brett Featherstone.