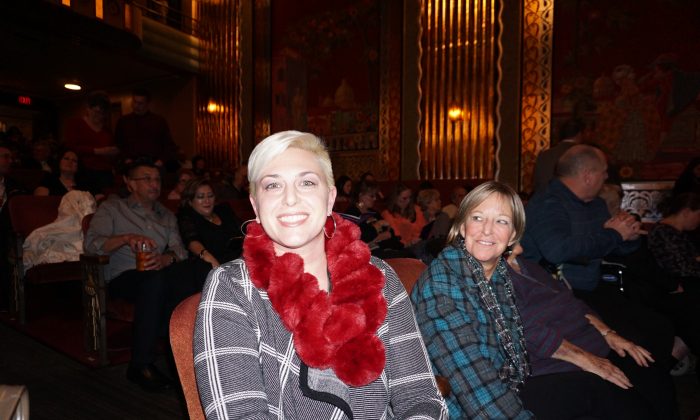 AURORA, Ill.—Absolutely stunning was how Jessica Overstreet described Shen Yun’s dancers after seeing Shen Yun Performing Arts Global Company on Jan. 12. Despite the several inches of snow and the low temperatures, nearly every seat was filled in the Paramount Theatre that evening for the performance.

This is the second consecutive year Shen Yun has made a stop in Aurora, Illinois during its Midwest tour. Currently, New York-based Shen Yun has six dance companies that tour the world simultaneously. Its mission to revitalize traditional Chinese culture through classical Chinese dance.

According to the website, “classical Chinese dance has helped preserve 5,000 years of Chinese culture. Built on traditional aesthetics, it was once passed down among the people, in imperial courts, and through ancient plays. Over thousands of years, it was constantly refined, eventually developing into the vast and distinctly Chinese dance form we know today.”

Jessica Overstreet was an amateur dancer for around 20 years. She has had experience in ballet, tap, and classical dance. She was forced to give it up due to an injury around the time of her college years. These days, she does sales and marketing for Overstreet Builders, her family’s business.

“It’s been beautiful, they’re absolutely stunning,” the former dancer exclaimed. “I love the sleeves I just love the flow of everything.”

“I don’t know anything about Chinese traditional dancing but it makes me want to be up there,” she said.

MOverstreet found the dancers’ technique beautiful. And she was impressed by their synchronicity.

“Their choreography is really nice. Their feet are pointing where they’re supposed to be pointed, their extensions are gorgeous. It’s different than the traditional ballet and everything that I grew up with but I’m really enjoying all of it,” she said.

She said what she found the most inspiring was a dance that told a contemporary story, which depicts the persecution of Falun Dafa practitioners in China.

“It was difficult to watch and it’s really sad,” she explained. “They can’t even perform this in their own country right now, it’s very sad they’re not allowed to express what they want to on stage in China, so we’re glad to have them here.”

Falun Dafa is a peaceful meditation practice that has been unjustly persecuted by the communist regime in China for almost 20 years and continues to this day.

“Being in America it makes me realize all of my freedoms that I have here. It makes me thankful for the country that we live in and very saddened that there’s a lot of places of where they are not allowed to express themselves freely,” said Overstreet.

She said she felt good, seeing the aspect of the divine in the culture played out on stage. “It makes us feel that we don’t have to do things on our own,” she said.

Overall, she felt that every aspect of the performance in its entirety played a part in its brilliance.

“It’s all part of the creative aspect of why we come to shows like this. There is still every single person that’s involved and it makes that more special,” Overstreet said.