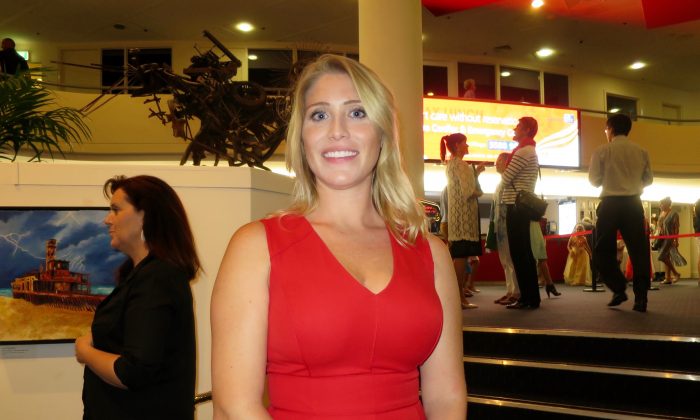 Ms. Kelly is a blogger for “Inside Gold Coast,” a media designed to promote the popular tourist destination, and inform about “what is going on and what to do on the Gold Coast.”

Shen Yun was impressive on  many levels, Ms. Kelly noted.

“It is absolutely astonishing how on time everyone is. Huge smiles, everything is beautiful and the stories they tell are so inviting and enchanting,” Ms. Kelly explained and added, “They make you feel  very fantastic.”

New York based Shen Yun takes the audience on a 5,000-year journey through China’s  rich culture,  including a time when earth existed in harmony with heaven, and when there were heroes and sages, dragons and phoenixes, and emperors and immortals, the company’s website states.

Using dance and music, Shen Yun’s mini-drama pieces draw on stories and legends that span China’s history from the Yellow Emperor, through the Tang and Song dynasties and up to the modern day.

One performance, “The Goddess of the Moon,” left a deep impression on Ms. Kelly.

“Honestly, I love the one about the woman on the moon. I thought that was beautiful.”

Modern China and the spiritual repression currently occurring under the communist regime are also depicted. Ms. Kelly was saddened that the freedom to follow one’s faith is not allowed in China.

“I think that is really a shame as it should not be that way. I love having freedom to choose what I believe … and it is a good feeling, so I hope that others can feel that way as well.”

Shen Yun’s story-based dances often convey themes of spirituality, a legacy of the ancient Chinese belief that Chinese culture was passed down to humans by gods.

“I personally am a spiritual believer and it is wonderful to be able to connect with something bigger than ourselves. I think it’s fantastic,”she said.

Ms. Kelly expressed her thoughts that, although life is difficult, Shen Yun gives us hope.

“I think there are a lot of things happening in the world that maybe we can’t all do something about, and it is nice for us to be able to look to something bigger … that could possibly lend a helping hand.”