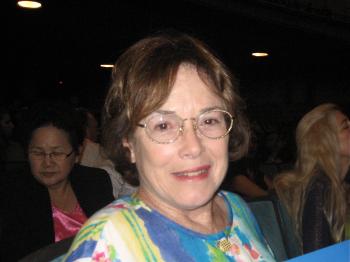 Janet Strong a retired motion picture costume artist, who has worked for all the major film studios, including Paramount, MGM and Twentieth Century Fox, Universal, was among the theatergoers for the Friday evening, April 29, show.

With so many years experience in the wardrobe department, Ms. Strong, who was invited to the show by a friend, deeply appreciated the array of vibrant Shen Yun Performing Arts New York Company costumes.

“I’m enjoying this show so much because of the colors and the costumes, and they match the backdrops, and everything is just fabulous,” Ms. Strong said.

“If I were a designer I would have designed something like that,” she said.

Describing her feelings of the show, Ms. Strong said, “Oh, it was just breathtaking. To see so much, I enjoyed especially the monks when they were playing and kidding around."

Ms. Strong was talking about Little Mischievous Monks in which young Buddhist monks engage in play when the abbot is not watching.

"When the curtain first went up, the beauty of the costumes and the background, and how they fly into the back, and everything was just really special,” she said.

Shen Yun is known for its animated backdrops that give characters a chance to fly.

“I think it’s beautiful. It’s amazing. They’re so agile … and so synchronized, and everything is so perfect. I’m enjoying the history of it and the spirituality of it. I mean everything—it’s just really quite a performance. I’ve never seen anything like it."