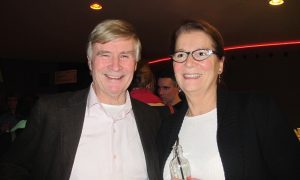 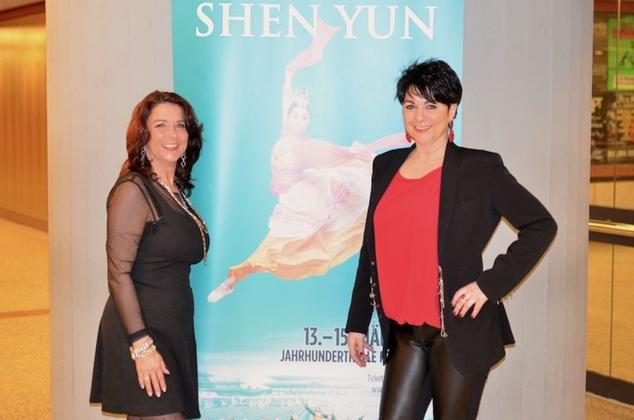 Shen Yun, ‘It Looked so Effortless’

FRANKFURT—Shen Yun Performing Arts opened its first of three performances in Frankfurt on March 13, 2015 at the Frankfurt Jahrhunderhalle. This venue hosted the New York-based classical Chinese music and dance company during all the years it has performed in Frankfurt.

Ms. Simone Bott and Sabine Senft, owners of Fliesen-Bott GMBH in Mainz, and their friend Ms. Elke Biancheri attended Shen Yun, because they wanted to experience a different culture.

Ms. Biancheri said, “The show was fantastic. I continue to visualize the young women gliding over the stage in a smooth and effortless manner in those gorgeous fluttering costumes. It looked so effortless, and was just fabulous.”

According to Shen Yun, “Every costume in a Shen Yun performance is presented with brilliant colors, displaying a splendid spectacle … Every detail [in the costumes] is given meticulous attention and is a result of artistic inspiration and careful polishing.”

Ms. Biancheri continued saying, “I compliment the achievement of these young women on stage. It is terrific when about 25 dancers leap and yet there is not a sound. It was like a dream.”

Ms. Bott said that she was of like mind when she joined the discussion. “Every expression, every smile, every leap and every movement was perfect and out of this world,” she said.

The ladies shared that what they had seen was not so much a message as the essence of a culture that dates back 5,000 years—back when art, literature, music, and dance were all divinely inspired.

Ms. Bott had goosebumps throughout the performance and in her mind “heaven, nature and humans are one. The performers were marvelous in how they expressed these three words and not just through dance, but also through song and music.”

‘The Two-stringed instrument represented the connection between heaven and earth’

According to Shen Yun’s website, “The erhu is one of the most important Chinese instruments, with a history of over 4,000 years” and “is especially stirring and somber, a quality eminently suitable for conveying the grand pageant of China’s history and the emotions of its people.”

Ms. Bott was deeply touched by the sound of the “instruments, such as the two-stringed one, instruments I have not heard throughout my entire life.”

Ms. Biancheri chimed in that for her “the two-stringed instrument represented the connection between heaven and earth.”

For these ladies, communicating a story through dance and music was fantastic.

Ms. Bott especially felt that she felt “connected and that [was] what impressed her most about the entire show.”

The three ladies felt that Shen Yun brings hope and shows that bad influences can be changed with kindness and forgiveness.

Ms. Biancheri said, “There was forgiveness and one learns that running with the pack is not the ultimate. No, when there is a wrong done, one should speak up.”

Despite Shen Yun being welcomed around the world, it is not allowed to perform in communist China. For decades the communist regime has systematically eradicated traditional Chinese culture.

Ms. Senft also shared her thoughts: “I remember a proverb that says it perfectly and can be applied to Shen Yun bringing back China’s cultural heritage, “Constant dripping will wear away a stone.”

“Today, there were a few drops on stage and they will slow down and surely wear away the interference and disruption worldwide,” she said.

Reporting by Florian Godovits and Heide B. Malhotra