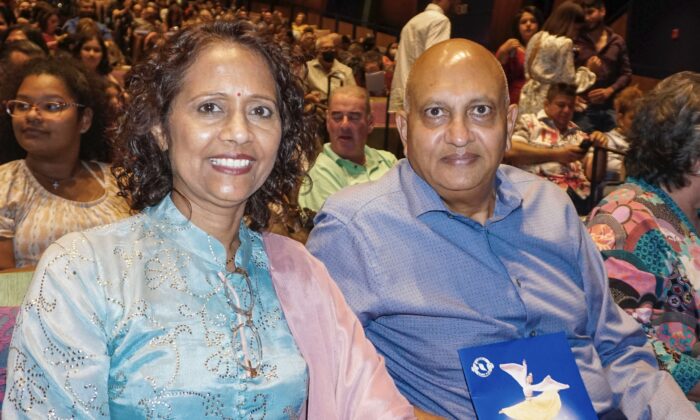 McALLEN, Texas—Barry Patel, former mayor of South Padre Island and the owner of three hotels, and his wife Jayshree Patel were delighted by Shen Yun Performing Arts at McAllen Performing Arts Center in McAllen on April 23.

It was the couple’s second time attending a performance by Shen Yun.

“We love the colorful dances … the culture, and the story behind every dance,” Mr. Patel said. “It’s very entertaining—and culturally very rich.”

New York-based Shen Yun is the world’s premier classical Chinese dance company. Along with Chinese folk and ethnic dance, and a live orchestra with solo vocal and instrumental performances, the production presents stories that depict the history and traditional culture of China from ancient times to the modern-day.

Shen Yun presents story-based dances depicting the persecution of Falun Dafa, also called Falun Gong, a meditation and spiritual discipline based on the principles of truthfulness, compassion, and tolerance. The Chinese Communist Party (CCP) launched a persecution against the practice in 1999, and adherents have since been subjected to unprecedented imprisonment, torture, and abuse.

One dance piece depicts the state-orchestrated crime of forced organ harvesting from Falun Dafa prisoners of conscience in China, as part of the CCP’s persecution campaign against the peaceful spiritual practice.

“I like the one about the surgeon … the persecution, the story was touching,” he said.

“We don’t see it, except when it’s in a performance like this,” he added.