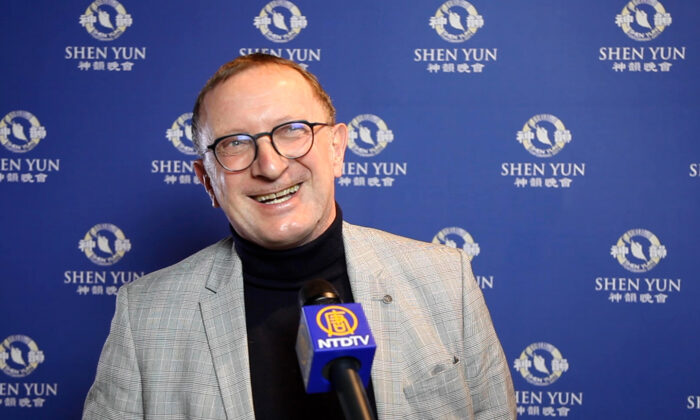 COLOGNE, Germany— Uwe Mies is a film critic but he attended this Shen Yun Performing Arts performance with the wish to be a regular audience member. After the performance, he shared his thoughts and found that the values presented by Shen Yun are universal and important to everyone.

“The faith that is conveyed there, you don’t have that anymore here in this modern world,” Mies said. “They naturally open gates for reflection and for emotions. And therefore I find such a performance really very refreshing and very enlightening.”

He added that people who experience New York-based Shen Yun can hopefully reflect on the values that the performance presented and use those values to better themselves.

“When you find a way to return to values of which people today say are old-fashioned—such values like solidarity, values like loyalty, values like a commitment to nature, then that can’t be wrong. And in this respect, I would say ‘yes’, this show can really achieve something. Maybe people will think about it afterward and behave a little differently next time,” he said.

I think that I will remember many of the scenes that I saw today and then try to behave accordingly.
— Uwe Mies

Regarding his own reflection, he added, “I think that I will remember many of the scenes that I saw today and then try to behave accordingly.”

As a critic, he has seen many German productions. He commented that Shen Yun was different from the productions he’s seen before. He was particularly drawn into the use of the digital backdrop.

“I’ve never seen such a combination on stage of cinema and live performance,” he said.

The elaborate use and unique combination of colors also struck him.

“I really liked the costumes, the colors, they are really very rich in color, that is something that you don’t see here on German stages in this form,” Mies said.