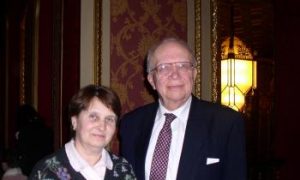 Professor: 'It's great when a show generates such feelings!'
0
Arts & Culture

Shen Yun is ‘unique’ ‘profound’ and ‘a wonderful experience’

Ms. Martes said “I was very excited to come, but this really exceeded my expectations.”

She wanted to “congratulate and thank each one of the people that contributed to the Shen Yun performance.”

Continuing, she added that she wanted her daughter to see the New York-based Shen Yun as soon as she had a chance, and that she would continue to spread the word of how wonderful Shen Yun is to her family and friends.

There were so many facets of the performance of the world’s premier classical Chinese dance and music company that Ms. Martes appreciated: “I love this show. I think that there is a uniqueness, and the movement, the visual stimulation, the message, and the combination of you know, being funny, being profound, and it was just a wonderful experience."

“It was such a wonderful mix with the singers, the performances, the cultures, the issues. It was just amazing," she said.

Shen Yun brings China’s millennia of culture to the stage with dances from its many ethnic areas, to story-based dance depicting ancient legends or modern tales. There are as solo singers and instrumentalist performances, too. Ms. Martes said, “I love many of the [ethnic dances]” and “It was just so very, very moving. Very wonderful.”

Ms. Shaw, a communications director for Kresge Foundation, agreed with her friend, adding, “I was just absolutely spellbound by this show … It was absolutely magnificent.”

The soloists particularly touched Ms. Shaw’s heart. “The singers were so moving. Just beautiful. Thoroughly enjoyed it. It’s been a real pleasure,” she said.

Shen Yun tours with a live orchestra of traditional Chinese and Western instruments playing original scores. “The orchestra was fantastic!" Ms. Shaw said, referring to the mixture of the instruments that we were familiar with and the Chinese instruments.

“The tranquility, I think, was the most powerful emotion.”

The state of the art digital backdrops depicting breathtaking landscapes and heavenly realms adds to the magic of the performances for many audience members.
Ms. Shaw explained, “It was beautiful! I loved seeing, having that visual because we’re not exposed to that. So to see all the different parts of the Chinese countryside was really educational, as well as beautiful.”

Ms. Burns works in Government Foundation Relations Engineering at the University of Michigan, Ann Arbor. Along with her friends, she thought Shen Yun “was a fabulous performance.”

All three ladies said they would spread the word and say to everyone “go see Shen Yun.”