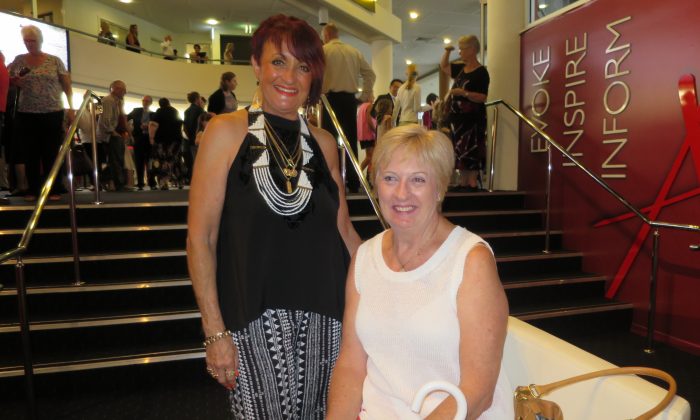 GOLD COAST, Australia—Rain, humidity, and cloud may have upset the weather barometer outside the Arts Theatre, The Arts Centre Gold Coast, but inside Shen Yun Performing Arts World Company had set the stage alight.

The unique performance of the classical Chinese dance and music company, had its audience transfixed as they journeyed through 5,000 years of China’s divinely-inspired cultural heritage.

Gold Coast businesswoman, Sharon Barnett was among the audience caught up in the momentum, for a third year running, as Shen Yun wove a tapestry of colour and excitement—even though the performance was entirely different from previous years.

“Loved it! Just wonderful!” Ms. Barnett said of the matinee performance, held at The Arts Centre Gold Coast, March 5. “The colours, the dancing, the techniques … just amazing. I really enjoyed it!”

She is the owner-director of H.A. Barnett, an agent for international manufacturers based in Asia that imports products through Australian distributors and retailers.

Ms. Barnett said she would continue to see Shen Yun each time because she had enjoyed Shen Yun’s music—a full orchestral ensemble playing a mix of East and West in original composition, sopranos singing bel canto style, an erhu virtuoso and piano accompaniment, and of course, because she loved classical Chinese dance.

“I enjoy the music, and I enjoy the dancing. It’s just so different to traditional ballet, or any other form of dance,” she said. “It’s unique.”

“I think it’s quite uplifting, and every section. Every episode I believe has a meaning, has a story behind it. Makes you think about life … that there’s hope for us all yet in a future life!”

She sensed still another message, she said. “The simple things in life are what’s important, and not materialistic things.”