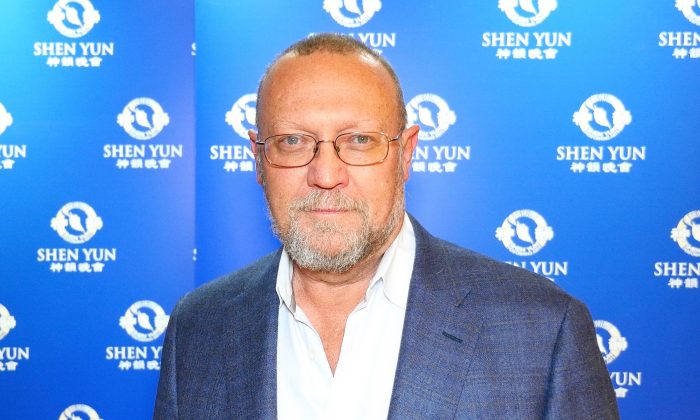 Daniel Watson, at Lincoln Center on March 12, wondered how anyone could not enjoy Shen Yun---it reaches our divine spirit. (Courtesy of NTD Television)

NEW YORK—When he was 9 years old, Daniel Watson got his first sword—a 300-year-old Chinese jian. This prompted his interest in martial arts, and eventually his becoming a professional swordsmith. Perhaps it also prompted his interest in attending a performance by Shen Yun Performing Arts, a dance and music company that presents traditional Chinese culture going back 5,000 years.

Starting with the legend of the Celestial Empire’s divine beginnings, the company’s presents Chinese literature, its dynasties, and some of its modern history in 20 or so pieces throughout the two and a half hour performance.

Mr. Watson was deeply inspired by what he saw at Lincoln Center on March 12. For just as Mr. Watson crafts one-of-a-kind art with each of his swords, New York-based Shen Yun creates all-original music, choreography, costumes, and special digitally animated backdrops for each piece.

“Here tonight, I’m very much enjoying art again in a different form. My experience is that for me to create art, I must also receive art from other areas, and tonight is a beautiful work. It’s given me nourishment, it’s given me fire, passion, enthusiasm, elegance that I will transform into something that I do,” he said.

What inspired Mr. Watson, he summed up in three words: “precision, dedication, passion.”

Shen Yun artists‘ passion formed the company in 2006 as a means to resurrect the nearly obliterated values that once defined China—a culture based on the inseparable bond between the heavens, earth, and humankind.

The company has remained dedicated to that purpose ever since.

Shen Yun’s precision has been noticed by just about all who see the company, and watch the large groups of dancers move together as one.

That precision, that artistry of the whole venture, transcends cultures according to Mr. Watson.

“Such art is not just cultural, it’s international. Because it’s reaching out and touching something divine within each of us,” said Mr. Watson. “That divine spirit that they express was something that we must feel.”