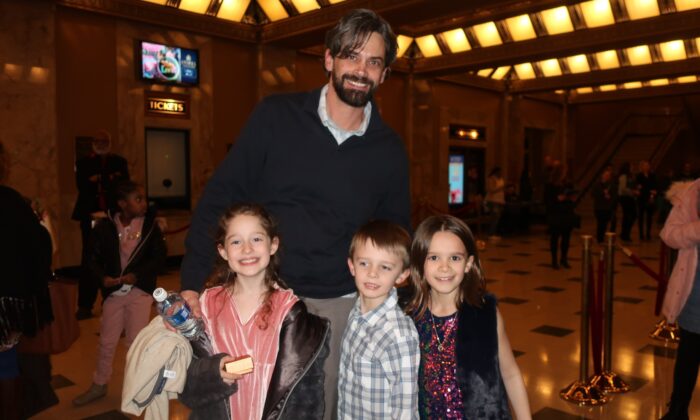 Beyers is the owner of Beyers Lumber and Hardware, a building and construction company in St. Louis. He brought his children to the performance by New York-based Shen Yun.

“We were mesmerized … It was quite a lovely performance, the dancing was spectacular, the special effects just blew my mind away, I really enjoyed that,” he said.

What mesmerized him specifically? “Obviously the dancing,” he explained. “The movement and the spiritual aspect that they inundated into the performance we weren’t expecting that.”

The business owner stated that he definitely felt and appreciated the spiritual aspect of the dances that he could sense through their movement and grace on stage. “There is a great deal of spirituality in the culture of the East, it’s nice to see it performed in the art and to have it present so the kids can see it and embrace it,” he said.

“I think there is a universal spirituality to it that crosses all boundaries,” he said of the cultural connection he made from watching the performance.

Beyers explained that this kind of cultural spectacle is much needed in today’s world and that wisdom has been overshadowed or obscured because nowadays there is an overemphasis on intelligence. “To see it [culture] presented in a … very open and universal way was moving and telling and welcoming to people in today’s generation,” he said.

According to Shen Yun‘s website, “Chinese dance is at the heart of what Shen Yun does. Known for its incredible flips and spins, and its gentle elegance, it is one of the most rigorous and expressive art forms in the world.”

Beyers was impressed with the level at which Shen Yun dancers perform and said it was more than technique.

“The amount of discipline that goes into that kind of performance—I think that centers the self and the soul, I think those performers made that very present on stage. To watch human beings contort themselves into moving that way almost suggests some sort of divine intervention,” Beyers said.

Beyers said he could definitely feel a certain power on stage.

“It wasn’t in a religious context,” he explained” “It was just very human to see people do that, and to attain that type of discipline I think has to reveal some spirituality.”