Shen Yun is ‘Mankind at its Best,’ Swedish Entrepreneur Says 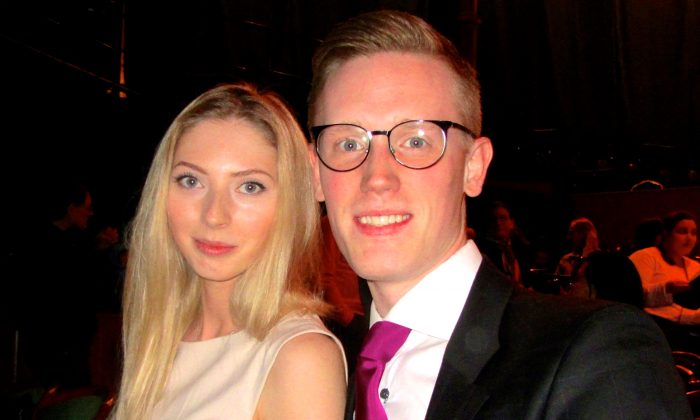 STOCKHOLM—When Shen Yun Performing Arts took to the stage for their second performance in Stockholm on Sunday, entrepreneur Simon Löfgren and dance teacher Kristina Minicheva were in the first row, close enough to see every facial expression, every gesture and every movement of a foot or an arm.

“You really get close to the dancers, and you can see how happy they actually are when they’re doing it,” Mr. Löfgren said after the show. “It’s mankind at its best, really.”

He added that he got a very intimate feeling from the show, both because they sat so close to the stage and because of the professionalism of the dancers.

“I feel like they’re looking at each and every person in the audience, and sending out their energy,” Ms. Minicheva said. “I got goosebumps several times from what they’re sending out, their feelings, the joy. It helps you get into the stories and understand more.”

Classical Chinese dance has a history of several thousand years, as related on the Shen Yun website. Throughout history, it has been passed down in imperial courts and in the Chinese theater and opera traditions.

“Soaking up profound wisdom from every era and dynasty, it has become a complete system of dance embodying traditional aesthetic principles with its unique dance movements, rhythms, and inner meaning.”

As a dance teacher, Ms. Minicheva understands the work behind this kind of performance. Several times when the dancers did their leaps, flips and spins, typical of classical Chinese dance, she felt as if her heart would stop, she said.

Mr. Löfgren found the show truly inviting, with its glorious colors and movements. He said that he never felt tired, quite the opposite, and that the artists performed at the highest level at all time, executing everything in a flawless manner.

Ms. Minicheva said that she really enjoyed the erhu solo performance, “All for Today”. The erhu, sometimes called the Chinese violin, can convey a broad spectrum of emotions.

“I really entered into a calm state, an inner peace. It was a wonderful moment to just sit there and enjoy the performance and think about the meaning of life, these bigger questions that you don’t usually go around thinking about. To just sit there and be at peace with life,” she said.

Shen Yun’s mission is to revive the 5,000 years of traditional Chinese civilisation. At first glance, you notice “sophisticated dance techniques, an orchestra joining instruments from both the East and West, beautiful costumes, and a stunning back drop,” according to the Shen Yun website.

“This show gives rise to a lot of emotions and there are a lot of things you think about afterwards,” Ms. Minicheva said. “It presents very good values to live by, like compassion, tolerance and truth. I think it would be good for children to see this show, as it gives a good understanding about life, what’s good and what’s not good. It makes good people, basically. After this show, you think a little bit more about what’s important.”

Something that touched Mr. Löfgren deeply is the fact that Shen Yun can’t perform in China. The Chinese Communist Party (CCP) has tried to systematically eradicate the legacy of 5,000 years of Chinese civilization, ever since the Cultural Revolution in the ’60s and ’70s.

Mr. Löfgren said that he found this hard to even relate to, living in an open country like Sweden. He said that he particularly enjoyed The Power of Compassion, a number that tells the story of CCP’s persecution of the peaceful Falun Gong spiritual practice, that began in 1999.

“It lifts you up out of your chair, almost, and shakes you, even though you’re sitting still,” he said “It’s like a roller-coaster ride, the entire show, but very close and intimate.

“I think a lot of people in China would like to see this. I hope China will open up more eventually, so that more people get to experience this,” he added.