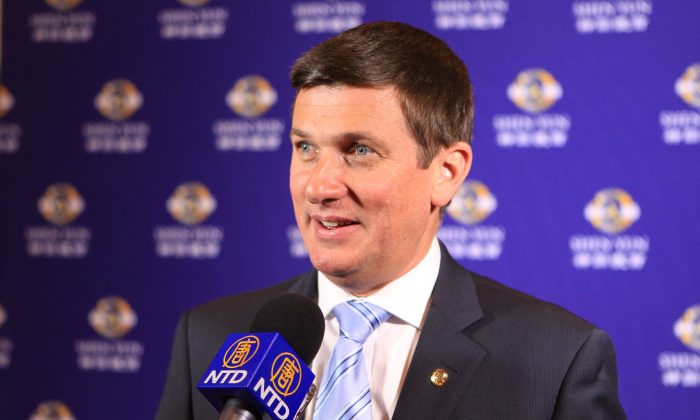 MELBOURNE, Australia—Shen Yun Performing Arts took the audience on a spectacular journey according to Neil Angus, the State Member for Forest Hill, who attended the Friday evening performance with his wife, Andrea, at the Arts Centre Melbourne, State Theatre on Feb. 26.

There were so many elements that stood out for Mr. Angus, “It’s certainly very spectacular and there’s plenty of colour the graphics and so are quite amazing,” he said.

“The orchestra has been fantastic; it’s great to hear such fantastic music. Such high quality dancing, the athleticism of all the dancers is quite something to behold. And with the backdrops they are very spectacular and of course the magnificent costumes that they are wearing throughout, so it’s really terrific.”

The diversity of the Chinese culture was evident to Mr. Angus, he found the performance quite informative.

“I am just enjoying it, and it’s interesting to see, you never know quite know what is coming next. It is obviously done at a very high level, so it’s been very enjoyable.”

Shen Yun brings to life those virtues and principles that are the essence of traditional Chinese culture, a very spiritual and moral culture—ideals such as benevolence and justice, courage and wisdom, and reverence for the divine.

The beauty of the costumes also struck a chord with both Mr. and Mrs. Angus.

“Shen Yun’s costume artists collect countless designs of traditional attire, ranging from those of emperors, ministers, and generals to the everyday clothing of the common people. They tailor and recreate hundreds of new pieces each season,” according to the performance company’s website.

Another aspect that impressed both Mr. and Mrs. Angus was the coordination of the dancers.

“I thought it was beautiful,” said Mrs. Angus. “They all worked together really, really well.”

Given the chance, Mr. Angus would like to give this message to the performers: “I would say to them congratulations, obviously what we see in the finished product represents an enormous amount of work and great discipline, great discipline in the terms of all the exercise they must do to get to this position—so congratulations to them on putting so much into it.”

Mr. Angus concluded with, “I think it was great, there’s obviously a lot of passion in terms of the people involved, and so that’s a great thing. It has been a terrific night, so thanks very much.”

‘It’s bringing back the harmony ‘

Michael Spaull works for a government department as a manager for Human Services.

He was keen to learn more about the Chinese culture as he has studied ancient Chinese history. It was a real treat for him to see this culture come to life on stage.

“I think China’s made up of so many cultures, so it’s nice to see all the different cultures represented here—their dance and their cultural background.”

Shen Yun is a performing arts company established in New York in 2006 with the mission to revive traditional Chinese culture. Performances include classical Chinese dance, Chinese ethnic and folk dances, vocal soloists, and combined orchestra of Eastern and Western music and instruments.

All the stories and legends have been passed down through generations and reflect all levels of Chinese society. They also bring out faith in the divine and the Mandate of Heaven, reflecting the essence of traditional Chinese culture.

“It gave each different cultures background and style and what they do, and that’s really interesting … .”

He felt that Shen Yun was portraying the beauty of this divine culture.

“It’s bringing back the harmony and the wellbeing of the person, that’s what its teaching. To live peacefully amongst yourselves and to accept other people from all varieties of life and walks of life and that’s what it brings,” he said.

“Also [messages] about life itself … joyful and happiness, happiness for other people.”

Mr. Spaull thought it is particularly important for people to learn about the Chinese culture, to give a deeper understanding for the Chinese people in our community.

“I feel happy inside, I feel good about it, and it’s a bit more opening in a sense—I mean enjoyment culturally.”

He said he would definitely encourage others to come and experience Shen Yun.

“I’d encourage them to come see it and to get the experience and to see the culture.”