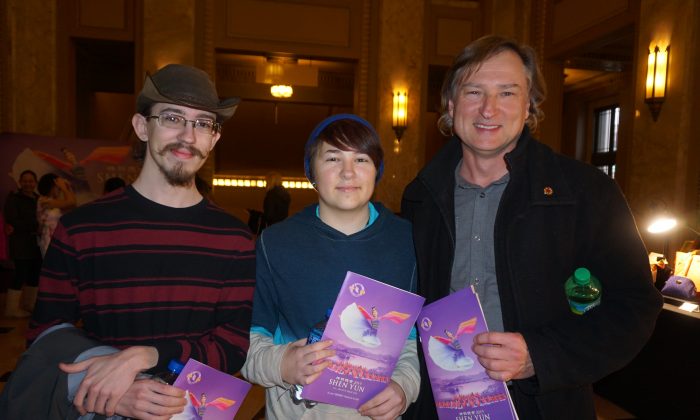 ST. LOUIS—When Patrick Girten saw Shen Yun Performing Arts North American Company’s matinee performance with his family on Feb. 10, at the Stifel Theatre, he found it all very artistically unique—everything from the colors of the costumes and backdrops, to the whole premise of story-based dance.

According to Shen Yun’s website, “Through the universal language of music and dance, Shen Yun weaves a wondrous tapestry of heavenly realms, ancient legends, and modern heroic tales, taking you on a journey through 5,000 years of Chinese culture. Its stunning beauty and tremendous energy leave audiences uplifted and inspired.”

Girten, distribution manager for Bristol Myers, said he learned a lot about Chinese culture through watching the performance, and how that applied to the present day.

“I liked to see the history being carried forward, you know, that it’s continuing on and they’re trying to revive it. It was amazing,” he said.

Throughout Chinese history, moral character and virtue were important values rooted in China’s ancient traditions. Many of these traditions have been suppressed since communists seized control of the country in 1949.

Mr. Girten could see some of these traditional values coming through in the dances.

He said it looked like human caring “Each individual person—It was just caring for the individual,” Girten said.

Ancient Chinese culture is said to be divinely-inspired, and so spirituality has played an integral part of China’s traditions for thousands of years.

“It was interesting that they’re trying to bring back the understanding of faith,” Girten said.

All of Shen Yun’s artists—dancers, musicians, choreographers, composers, and the entire team—follow the noble tradition of looking to the divine for inspiration, according to the website. It states, “For them, this spiritual connection is motivation for striving to excel, is the heart behind each movement of the dancer and each note of the musician. It is why audiences can feel there is something different about Shen Yun. Their source of inspiration, rooted in traditional Chinese culture, is the spiritual discipline known as Falun Dafa.”

Girten added that the performance also brought awareness to an ongoing persecution he hadn’t known about. The communist regime has been brutally persecuting practitioners of Falun Dafa since 1999. Falun Dafa is a peaceful meditation practice rooted in the virtues of truthfulness, compassion, and tolerance.

Mr. Girten described what he saw in the dancers as a way of expressing their souls.

“It didn’t seem like just movements. It seemed like they were acting. It was just part of their—the way they were as a person,” he said.