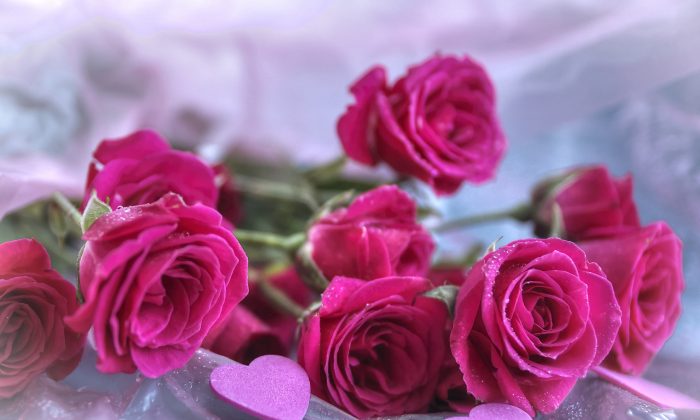 Shen Yun Is a Special Gift for Valentine’s Day

Valentine’s Day symbolizes the emotions of the heart and are often expressed with gift giving. Eric Hughes thought tickets to see Shen Yun Performing Arts on Valentine’s Day was the perfect surprise gift to give his wife, Christy, last year in Grand Rapids, Mich.

Ms. Hughes found Shen Yun’s presentation of 5,000 years of traditional Chinese culture to be exciting. “It gave me goose bumps,” she said. “I was very happy. I wanted to go so bad!”

Three out of four of Shen Yun Performing Arts Companies will be performing, in America, over the Valentine’s weekend: in St. Louis Mo. at the Peabody Opera House, on Feb. 12-14; in Rosemont, Ill. at the Rosemont Theatre on Feb. 13-14; and in Waterbury, Conn. at the Palace Theater, on Feb.13-14.

Shen Yun brings ancient Chinese civilization to life through the universal language of dance and music. Specifically, the heart and soul of the performance is expressed through classical Chinese dance, and music using traditional Chinese instruments amid a full Western orchestra.

The Chinese instruments used are the erhu, dizi, pipa, and suona. They form the melodies and emotions of the stories being told on stage. The Western orchestral instruments create the dynamic foundation.

For example, “the erhu, also known as the Chinese violin, is one of the most popular and important Chinese instruments. It has a history of over 4,000 years. Though it has only two strings, it can convey a wide range of emotions,” states the Shen Yun website.

The sound of the erhu touches many audience members, such as Cristen Dokic. She also attended the performance on Feb. 14 in Grand Rapids. “It made me feel really happy and relaxed. I even giggled a couple of times and let a part of my soul come out in the quiet room. I thought, ‘Yes, music is like medicine.'”

Mrs. Dokic’s reference to music and medicine comes from the Shen Yun emcee at that performance who described that “the Chinese character for music … is derived from the character for medicine.”

Shen Yun Symphony Orchestra composer Gao Yuan elaborates in an interview on Shen Yun’s website: “Our ancestors believed that music had the power to harmonize a person’s soul in ways that medicine could not. In ancient China, one of music’s earliest purposes was for healing.”

Shen Yun captures China’s history from the Yellow Emperor through the Tang and Song dynasties to the present day. It might be the Monkey King, Mulan, or General Yue Fei. The historical and legendary characters win the hearts of young and old alike.

The true essence of one’s heart nature celebrated on Valentine’s Day can be found in traditional Chinese culture. Shen Yun takes abstract thoughts of the heart or soul and makes them concrete.

Thus, the historical events and legends embodied such traditional morals and values such as loyalty, filial piety, selflessness, tolerance, and reverence for the divine. According to Shen Yun’s website: “Heroes are extolled for their compassion and tolerance as much as their courage or determination when facing adversity.”

Mrs. Lonergan described Shen Yun as “vivid, amazing, knowledgeable, and very well done.” For her, the entire performance had a feeling of respect and honor.